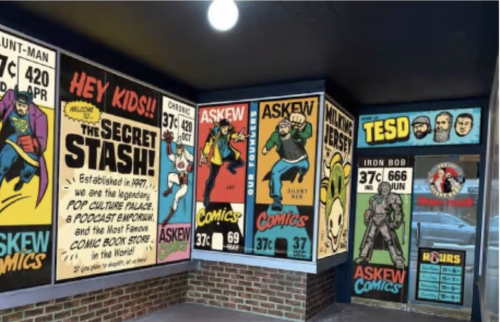 A rendering shows the window clings that will cover one side of the vestibule of the new Jay and Silent Bob’s Secret Stash. (Image by South Shore Sign Company. Click to enlarge.) 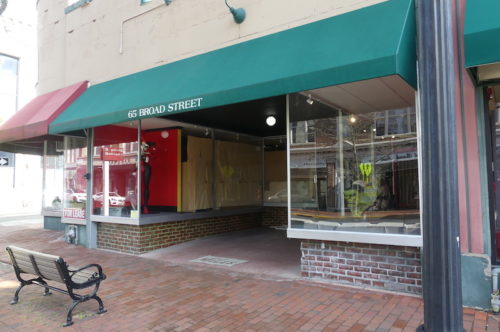 The filmmaker’s comic book and collectibles store is in the process of relocating from its longtime home at 35 Broad Street to 65 Broad, and went before the HPC seeking approval for signage and an awing.

Smith participated in the Zoom meeting, unseen because of technical issues, but certainly heard. Breezy and profane, Smith made history as the commission’s first witness to drop a casual F-bomb during testimony, Chairwoman Michaela Ferrigine acknowledged to redbankgreen afterward.

He said the store had considered relocating to Leonardo section of Middletown, where the Quick Stop featured in a his breakout film “Clerks” now serves as a fan mecca. But Stash manager Michael Zapcic persuaded him to keep the store in Red Bank, Smith said.

“He was like, ‘look, Leonardo, the only people you’ll get are the people who are looking for you,'” Smith said. “He goes, ‘in Red Bank, we get people coming in who don’t know who the fuck you are and don’t know anything about Jay and Silent Bob, and just see a colorful store and walk in.'”

To the delight of board members, Smith said the store would maintain its vestibule as well as the inlaid brass branding in the vestibule floor for a long-gone shoe store.

Much of the hearing concerned window clings that would be installed along one side of the vestibule. Designed in the loud style of classic comic books, Stash’s clings serve both to advertise the business and shield precious comic books from the sun’s damaging rays, just as similar window coverings at 35 Broad Street did, Smith and Zapcic said.

As reported by redbankgreen, that store’s window coverings were cited for exceeding the 20-percent coverage limit in a borough ordinance in 2019, but the planning board later granted the Stash a variance.

“We’re hoping to grandfather this in,” considering that less window coverage would be needed at the new address, Zapcic said.

“I think they’re fun and they’re iconic,” said HPC member Barbara Boas, who also sat on the planning board for the prior approval.

A plan to supplement an “old-school record” logo on the facade of the building with the full name of store underneath was dropped, Zapcic said, because part of the name would be obscured by a tree most of the year.

Besides, “it felt like a hat on a hat,” Smith said. “The tree is something of a pain in the nuts… but I want the tree there, and I don’t feel the sign being smaller hurts us one iota.”

Smith said the store will open next month, with a “COVID-dependent” grand opening ceremony anticipated soon after.