The Atrium at Navesink Harbor, the buildings at center and right, as seen from the Navesink River in 2017. (Photo by John T. Ward. Click to enlarge.) 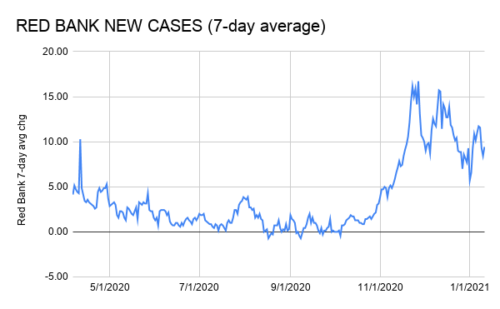 After rising sharply in the first half of December, Red Bank’s seven-day average of new COVID-19 cases has shown signs of easing. (Monmouth County Freeholder data. Click to enlarge.)

According to the state health department’s weekly update on COVID-19 in longterm care facilities, the Atrium at Navesink Harbor has reported 10 deaths in a current “outbreak,” which the state defines as one or more infections.

A week earlier, the number of deaths at the Riverside Avenue facility stood at four; on December 18, it was one.

The outbreak began September 29, according to Julia Zauner, a spokesperson for facility owner Springpoint Senior Living.

The Atrium offers its senior citizen clients both assisted-living apartments as well as 43 beds for those requiring longterm care, according to another state web page.

Working with a chain pharmacy, the Atrium plans to begin administering a COVID-19 vaccine to workers and healthcare facility patients who are not sick or recovering on Friday, Zauner said.

• At Red Bank’s other longterm care facility, the Hackensack Meridian Health center on Chapin Avenue, 6 residents and 10 staff members had confirmed COVID-19 cases as of Monday, compared to 4 and 10, respectively, a week ago. The 180-bed facility has had no recent deaths, the report indicated.

• As of Monday, there were 464 COVID-19 patients in Monmouth County hospitals, down 22 from a week earlier, the county government reported. Of those, 73 were in intensive care (down 9), and 57 were on ventilators (down 6), the county freeholders reported Monday.

• The state’s website reported 999 COVID-19 confirmed deaths in Monmouth County since the start of the pandemic, with no change in three days. The county government, however, reported seven additional fatalities Monday, without providing a total.

• In their daily update Monday, Monmouth officials reported 1,131 confirmed COVID-19 cases in Red Bank since March, up 8 from Sunday and up 108 since December 31.

Here are the county’s cumulative case totals by town since the start of the pandemic in March: