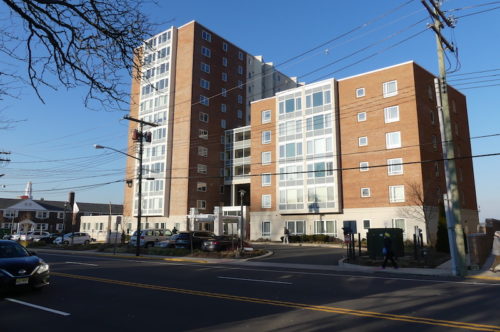 The Atrium at Navesink Harbor on Riverside Avenue. (Photo by John T. Ward. Click to enlarge.)

State health officials cited a Red Bank longterm care facility that has been the scene of 10 recent COVID-19 deaths for “deficiencies” in its defense against the virus in November, redbankgreen has learned.

The Atrium at Navesink Harbor failed to ensure that its infection preventionist “actively performed responsibilities in accordance with her facility designated role,” according to a New Jersey Department of Health & Human Services inspection report.

The report was based on a “COVID-19 focused infection control survey” conducted at the Riverside Avenue facility on Friday, November 27, one day after the first COVID-19 death in a facility outbreak that has since killed nine other residents.

According to the state agency’s weekly update on COVID-19 in longterm care facilities issued Monday, the Atrium has reported 10 virus-related deaths in a current “outbreak,” which the state defines as one or more infections.

There is no allegation of a connection between the unidentified resident’s death and the compliance deficiency contained in the surveyor’s report. But “all residents with potential for infection are at risk due to” such lapses, the report says.

No staff members are reported to have died from the virus.

The Atrium provides luxury apartments for seniors in its assisted-living operation, as well as a 43-bed longterm care facility for residents.

The outbreak, which is ongoing, began September 29, according to Julia Zauner, a spokesperson for facility owner Springpoint Senior Living, based in Wall Township.

As of Tuesday, the facility had 30 resident and 35 employee confirmed COVID-19 cases, Zauner said. Three employees were “counted twice” because they tested positive both before and after a period in which they were deemed to have recovered, she told redbankgreen.

The state report cited an executive directive issued August 20 by Governor Phil Murphy addressing longterm care facilities in the pandemic, which has disproportionately sickened and killed seniors and congregate-living residents.

“Maintaining core infection prevention and control practices is key to preventing and containing outbreaks and is crucial in ensuring the delivery of quality, safe care,” the 45-page directive said.

The directive also states that, “at minimum,” the duties of an infection prevention and control employee include “performing inspection surveillance.”

From the Atrium report by a health department surveyor:

“The surveyor further inquired as to the [infection preventionist’s] specific  duties related to the facility’s infection surveillance process. The IP stated that she was not responsible for the facility’s infection surveillance. The surveyor inquired to the IP what her job duties as the IP consisted of. The IP stated she  was responsible for ordering and managing the facility personal protective equipment supplies and provided staff education.”

The surveyor “expressed concern that the Infection Control Specialist did not play a larger role in the process of collecting data and reporting for the community,” Zauner told redbankgreen via email.

Atrium Executive Director Michael Gentile “responded to the survey regarding how the community manages the data collection and reporting,” Zauner said, and “the deficiency was satisfied and the community was deemed to be in compliance.”

The facility agreed to take several measures to correct the deficiencies, including meeting weekly for three months with the infection preventionist and conducting work audits “to ensure all aspects of job description are completed,” the state’s report said.

In July, routine inspections at the Atrium and at Red Bank’s other longterm care facility, the Hackensack Meridian Health Nursing & Rehabilitation center on Chapin Avenue, found no deficiencies, according to separate reports.

Reports from a routine inspection of the Hackensack Meridian facility conducted October 28 were not immediately available.

As of Monday, 6 residents and 10 staff members at the Hackensack Meridian facility had confirmed COVID-19, compared to 4 and 10, respectively, a week earlier. The 180-bed facility has had no recent deaths, the report indicated.