Marchers took to the streets of Red Bank in June, 2018 to protest the Trump Administration’s border policies. (Photo by John T. Ward. Click to enlarge.)

A virtual parade of speakers, some near tears, pressed the Red Bank council Wednesday night to support a host of protections for undocumented immigrants.

“It is never symbolic to acknowledge the humanity of any one person,” said a young woman who identified herself as Carla, Red Bank Regional senior and officer of the school’s Dreamers organization. “Doing so is, in fact, the most radical of acts,” she said. A young participant in a march for immigrant rights held in Red Bank in December, 2017. Below, an apparent arrest by ICE outside the Broad Street Foodtown in August, as photographed by a reader. (Photo above by John T. Ward. Click to enlarge.) 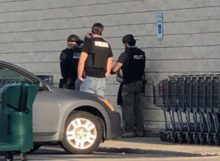 The resolution called for elected officials at the county, state and federal levels to “reunify migrant families presently separated in detention centers, to end migrant detention as a practice, and to afford these families meaningful due process in immigration proceedings.”

The measure, which the all-Democratic council unanimously endorsed, also called for the provision of housing, health protection and legal representation.

Without mentioning the Trump administration, Mayor Pasquale Menna said the resolution sought to “change some of the havoc that was created at the border” in recent years.

During council’s back-to-back workshop and regular sessions, conducted via Zoom, a number of speakers urged the council to make Red Bank the eighth town in New Jersey, and the first in Monmouth County, to adopt the resolution. Montgomery, Bound Brook, Princeton, Hoboken, Jersey City, Trenton, and Piscataway have already done so, according to one speaker.

“It’s time to wake up and realize [undocumented immigrants] are not criminals,” said borough resident  Cristian Aparicio, a former president of the Brookdale Community College Dreamers organization. “We have to return them to their families immediately.”

Judy Pack, a Hudson Street resident affiliated with Our Revolution Monmouth, denounced what she and others called “inhumane, unconstitutional and cruel policies” inflicted on people seeking a better life.

Undocumented immigrants are “our neighbors, and our friends,” she said. “They’re essential workers, and they’re taxpayers, and some business owners, and they’re students, and we need them. They have so much to offer our little town, our state and our country.”

Adriana Medina Gomez, of the Red Bank office of the American Friends Service Committee immigrants rights program, said the “atrocities” are not all occurring thousands of miles away.

“It’s not rare for our attorneys to be referred cases of unaccompanied minors who have no one in this country to depend on,” she said. “And unfortunately, it is common for our staff to receive calls after loved ones have been detained,” leaving family members, and often, children who are United States citizens, traumatized.

Karla Ortega, a Spring Street and DACA recipient, said she was “proud to see Red Bank take a stand” on the issue, in part because she fears her undocumented mother, who undergoes kidney dialysis treatment three times a week, might be deported by the federal Immigration and Customs Enforcement agency.

“We know ICE has been in Red Bank and towns nearby,” she said. “I fear for her safety now more than ever.” She also worries her five-year-old brother “might be separated from his mom.”

“I cannot tell you how touching it is that undocumented and mixed-status community members feel comfortable coming to the council to share their stories,” said Itzel Perez Hernandez, a Locust Avenue resident, DACA recipient and organizer for the American Friends Service Committee. “Those stories are rarely ever shared publicly.”