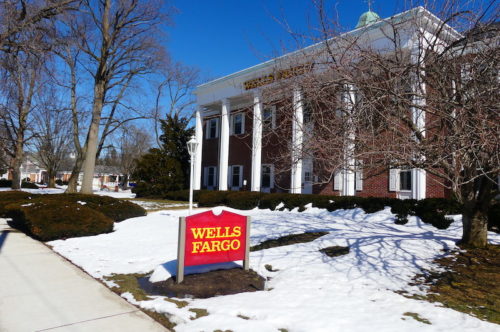 The building at Broad Street and East Bergen Place has served as a branch for various banks since 1965. (Photo by John T. Ward. Click to enlarge.)

Red Bank’s Redevelopment Agency is looking at a Broad Street bank site as a possible future home for borough government.

Emphasis on “possible.” But the Wells Fargo branch at the corner of East Bergen Place has attributes that may make it “viable,” borough Business Administrator Ziad Shehady said at the agency’s monthly meeting Tuesday. Portable cooling equipment was needed during a failure of the HVAC system  at 90 Monmouth Street in 2014. (Photo by John T. Ward. Click to enlarge.)

The agency, created in May, 2019, has several weighty tasks. One is to evaluate the potential costs of repairing, redeveloping or selling a roster of municipal properties.

At its latest session, the redevelopment agency authorized DMR Architects to “do a concept design” to see if the bank building at 303 Broad Street can fit borough offices, the police department and municipal court in it, according to the approved proposal. The firm’s fee for the work is $12,500.

The contract, one of four OK’d by the agency at the session, follows a “needs analysis,” said consultant Ken DeRoberts, who confirmed that the bank property is the subject of the DMR review.

In response to a redbankgreen request submitted Wednesday for any redevelopment agency documents in which the Wells Fargo property is discussed, Shehady, who plans to leave his post as agency executive director, replied that he believed that happened just once, “in an advisory document by a consultant for the agency.”

But on the advice of agency attorney Ron Gordon, the document was not releasable, Shehady said.

“While we don’t want to withhold the other documents and would prefer to be transparent, their premature release have broader legal implications and are exempt from disclosure at this time,” he said via email.

The agency meeting was the first at which the bank property was publicly identified as a possible new home of a municipal complex.

With the DMR proposal up for approval, member Wilson Beebe reminded his colleagues that, early on in the agency’s endeavors, he had asked if there was an “opportunity to integrate” a possible new municipal center into a broader effort to identify land that might be deemed in need of redevelopment, as defined by state law.

The aim would be to “jump-start” redevelopment, he said.

Beebe said he was “a little surprised” to see the DMR proposal come up, “since we had not been committed necessarily to that site – we hadn’t rejected it –  but I wanted to have a conversation about other opportunities in the borough where we might jump-start some positive development.”

“Yes, there are other possibilities,” Shehady said. But without mentioning Wells Fargo or the specific address, he said the Broad Street site “seems to be, from a logistical and operational point of view, purely on needs, the most viable one right now, and we didn’t want to further delay things.”

Obtaining a concept plan that addresses whether borough “can things fit in there the way we want,” and what it might cost to do so, could help the agency decide whether to continue looking at the site as an option or move on, he said.

“It wasn’t intended to say this is the location we want, but sort of a process to help us eliminate or help us move the process further along,” he said.

DeRoberts added that the property “just came on the market two months ago, so we want to be able to at least move to see can we fit into this location, is this something we’re going need to accelerate our timeline for?

“At least this gives us enough information for a starting point,” he said, adding that the DMR work will also feed into the “first cut of a financial analysis” to be presented to the council, which will have final say on all agency recommendations.

The Colonial Revival-style bank structure was designed by longtime Red Bank architect Bernard Kellenyi, and opened as the headquarters of Monmouth County National Bank in 1965, according to local historian Randall Gabrielan’s ‘Red Bank in the Twentieth Century.’

The red-brick building, trimmed with tall white columns, has served as a branch for various banking companies as the industry has consolidated over several decades.

The 3.5-acre property is assessed at $4.65 million, and is owned by Grace Aquisitions [sic] NJ LLC, based in Lakewood, according to tax records.

Though it is a tenant, Wells Fargo is in the midst of a planning board hearing in pursuit of drainage, lighting and landscaping changes at the site. The board is scheduled to continue its review of the application Monday night.

Separately, developer Steve Denholtz, whose company has been a tear of real estate acquisition and construction in the borough in recent years, has asked the agency for a meeting at which to make a proposal. The agency appointed a three-member subcommittee to meet with Denholtz and report back.