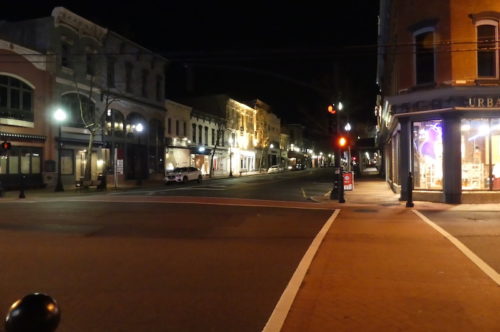 The funds will enable the borough to begin filling its own budgetary holes while providing aid to renters, small businesses and local non-profits, said an elated Mayor Pasquale Menna.

But one item it can’t be used on, contrary to the suggestion of a council candidate, is repairing the shuttered Senior Center, according to two officials. 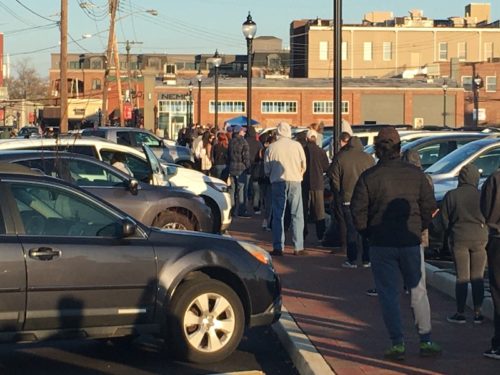 People lined up for free COVID-19 testing in the White Street parking lot in November. (Photo by John T. Ward. Click to enlarge.)

“This is an extraordinary event for the borough of Red Bank,” Menna said during the council’s semimonthly session, conducted via Zoom under continuing pandemic guidelines.

“A year ago, we faced some extraordinary, herculean challenges. The future did not seem very bright for so many people on a personal level, and certainly for communities on a collective and social level,” he said.

He cited impacts that included store closings and shutterings of other businesses, people of “all backgrounds really struggling to make ends meet,” as well as both lost revenue and soaring expenses for local government.

He said the stimulus funding  will enable the borough to “reach out” to philanthropic and nonprofit organizations as well as individuals facing housing challenges, while applying some of it to municipal government needs. He offered no specifics in terms of allocations or recipients.

In a memo to the mayor and council, Business Administrator Ziad Shehady called news of the funding “FANTASTIC,” and cited language in the bill on how it can be used.

From the memo, obtained by redbankgreen:

The great news is this will help us with the loss of revenues we dealt with last year and that we will again have this year due to the pandemic.  I believe this should be our first priority to ensure we can provide tax relief to ALL Red Bank taxpayers by way of a healthy, balanced budget (especially since we really strained our surplus/reserves last year).
This will also allow us to look at some much needed projects like sewer system upgrades and some novel projects like wi-fi in public spaces for broadband accessibility.
Lastly, and this will all need to be clarified after the bill is signed on Friday, we could potentially launch an economic stimulus plan to provide micro-grants for those that were unemployed/lost wages, utility bill/rent assistance, etc.  These would be trickier and may be later precluded in the federal guidelines but it’s something to research.
The legislation does not seem to allow for the use of funds for other public works type projects (parks, buildings, grounds, roads, etc) or equipment needs (vehicles, trucks, computers, etc.)
It’s still too early to get into a real substantive discussion on this but they are some ideas which we will be able to discuss further when the federal government provides clarification and more guidelines on the use of these funds.

During public comments, Bruce Maida, one of two Democrats backed by the local party in a primary challenge to incumbent council members Kate Triggiano and Hazim Yassin, proposed that the funding be used to repair the Senior Center, which has been mothballed for two years because of damage from a leak and subsequently discovered deficiencies.

The $1,175,466.65 in federal funding is “enough to fully cover the cost of repairing” the center, Maida said in a press release issued earlier in the day.

Maida said he had reached out to borough officials “asking that a licensed, insured and bonded contractor with fire suppression system expertise be allowed access to the shuttered center to inspect the damage and provide a non-binding cost estimate and repair timeline.”

During the council session, he asked that a resolution embodying his suggestion be adopted, immediately if possible.

Triggiano, however, said the funds “could never be allocated to fixing the Senior Center. The needs and the purposes of that money are clearly spelled out” on a Congressional website detailing the legislation, she said.

“There is not a single way this money could be used for a Senior Center that suffered a loss that has nothing to do with COVID,” she said.

Later, Maida, of Branch Avenue, told the council that the funds could be used to cover “other shortfalls, that will allow us to have the money to fix the Senior Center. So indirectly, it can actually fund the Senior Center.”

The council also approved an item not on the agenda: appointments to an ad-hoc committee to revive the downtown Broadwalk concept from 2020, when the northern end of Broad Street was closed to vehicles so it could be used by restaurants, shops and pedestrians.

On the committee are:

Councilman Ed Zipprich and several public commenters questioned the outreach that Yassin, as liaison to Red Bank RiverCenter, had made in soliciting non-business-owning residents to serve on the committee.

Yassin said he had mentioned the availability of seats on the committee “at probably six or seven council meetings,” and had also reached out to RiverCenter and the Red Bank Business Association for input.

The process did not include a formal application, he said. “It’s up to the council to decide whether we want to accept these members or not,” he said.