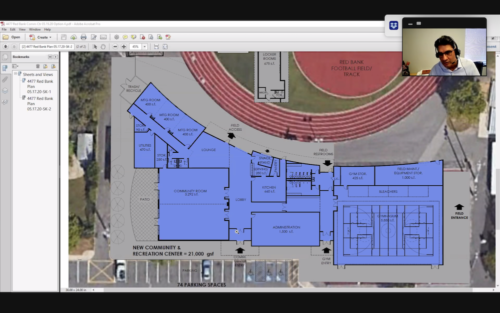 Added to the “fix it now” demand by advocates of a stand-alone Senior Center was a new one: leave the outdoor basketball courts at Count Basie Fields alone. The entry gate and playground at Count Basie Fields would be replaced with new facilities under a proposal. Below, Kapoor provided cost estimates for the various options. (Photo by John T. Ward. Click to enlarge.)

“There definitely is an issue with removing the basketball courts,” said John Street resident Craig Dolan, a youth coach and parent who’s often at the park three nights a week. “They are packed” with players, he said.

“We go through there at night, and people are playing late into the night,” said Marjorie Lane, of Tower Hill Avenue. “They won’t be able to do that with a closed facility.”

Pradeep Kapoor, a partner in DMR Architects, a firm that specializes in municipal projects, described the five concept plans he came up with in response to an assignment given just a month ago and delivered to the agency shortly before the meeting. They called for:

• Restoring the Senior Center on Shrewsbury Avenue to its pre-damage layout with needed code upgrades.

• Redeveloping the Shrewsbury Avenue property as a three-floor senior center and rec center, with grade-level parking beneath most of the structure, and an elevator.

• Building a combined rec center and senior center on one level at the southern entrance to Count Basie Fields, incorporating a gymnasium, meeting and activity spaces, snack stand and restrooms.

• Building a rec center, but no senior center, at Basie.

Ziad Shehady, serving as agency executive director pending replacement since he announced his resignation at the agency’s monthly meeting in February, said the cost estimates were based on “raw data” and cautioned against “anyone comparing these numbers apples to apples.”

The most expensive option appeared to have little or no support, with most attention during the Zoom meeting on the Count Basie facilities.

In addition, commentary during the session was notably less rancorous than at recent agency meetings and rallies organized to press town officials to leave the Senior Center in its present riverfront location and dedicated to use by seniors.

The facility has been closed for the past two years following a burst fire sprinkler.

Tiffaney Harris, a leader in the “fix it now” drive for the Senior Center, divided her response.

“The Senior Center should be by itself, as we’ve been saying all along,” Harris said. “As for a rec center at Count Basie, that should also be by itself.”

Building the rec center at Basie would also add restrooms for use by game players and spectators even when the rest of the facility is closed, Harris and others noted.

“I kind of like the first two Senior Center options,” said local activist Ben Forest. “One of the really powerful things about the Senior Center location is its location.”

The combined facility at Count Basie is “just too big,” he said.

“It really would open us to a variety of programs we can’t do now, especially in all weather conditions,” she said.

“I like that we took the time to explore all of the options that were available,” said Nancy Blackwood, of Chestnut Street. “This is a very healthy process.”

Agency Chairman David Huber said the cost estimates would be forwarded to the advisory board’s financial advisors, with a response possible at the next monthly meeting April 27.