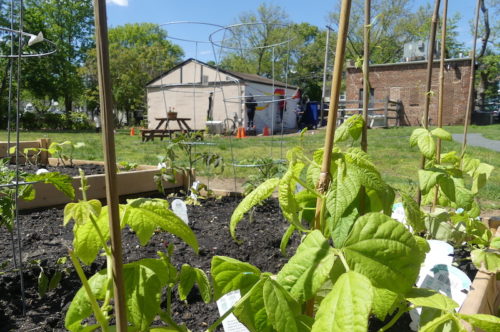 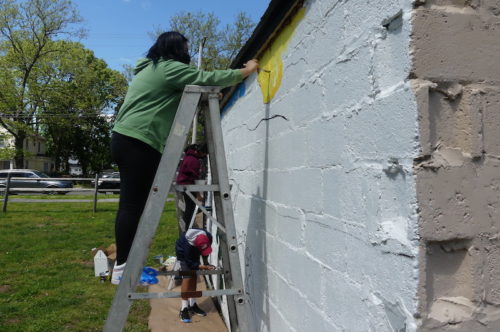 Eighth-grader Fatima Singer, above, and other middle school students at work on a mural earlier this week. (Photos by John T. Ward. Click to enlarge.)

Both are within a half-acre yard not long ago envisioned as the site of a development dubbed “West Side Bravado.”

Approved by the planning board in May, 2018, it called for a new 3,900-square foot building fronting on Shrewsbury Avenue, with Coffee Corral relocated into about half the space and the rest to be operated as a jazz-themed restaurant.

But with the recent retirement of her father, builder and Coffee Corral founder Russ Crosson, the plan is on is on indefinite hold, shop owner Courtlyn Crosson told redbankgreen this week.

Instead, she and her husband, Eric Reulbach, are focused on leveraging the grassy lot as a sort of public plaza alongside the nine-year-old business.

Trimmed by a split-rail fence and featuring cinder paths connecting clusters of Adirondack chairs, the corner emerged this spring as a late-pandemic place to soak up caffeine and sunshine outside a coffee shop that was built for takeout-only.

On Saturday, for example, Coffee Corral plans to host an adopt-a-dog event organized by Wag On Inn from 10 a.m. to 1 p.m.

More lastingly, if not permanently, the business has turned over to local school kids a patch of ground for a garden and the walls of a garage for murals.

Last month, National Junior Honor Society students from the middle school created the garden, planting fruits, vegetables and herbs in newly created beds. Their younger counterparts from the primary school have had a hand in the project, learning to water and care for the plants.

Then, art teacher Diana Pilar Archila, who spent the pandemic redeployed as a bilingual assistant in sciences classes, saw a way to give art-deprived students an outlet for their creativity.

Archila other teachers assembled seventh- and eighth-grade students with an interest in art to contribute ideas to a vision board for the murals. She then blended all the suggestions into composite murals, which she sketched in black on the east and west walls of a garage for the kids to color in with paint.

Standing on a ladder Wednesday afternoon, paintbrush in hand, eighth-grader Fatima Singer said she was happy just to be outdoors.

“During the quarantine, I started painting my own walls at home, but it’s fun to be outside,” she said. “And it’s nice to have the community see something bright when they pass by.”

Crosson said she hopes the students and their families will keep coming through the summer, picking vegetables as they ripen for their home tables.

And the building project?

“We’re sitting tight, because the outdoor space has been such a savior for us,” Crosson said.