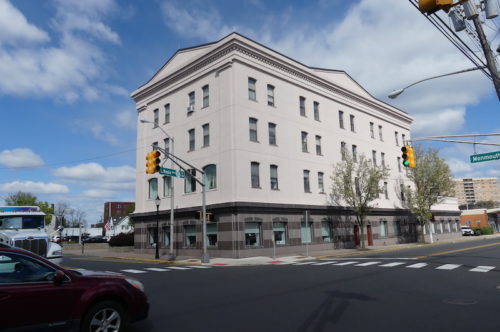 The council meets via Zoom due to pandemic restrictions. (Photo by John T. Ward. Click to enlarge.)

The creation of a commission to examine Red Bank’s century-old government structure is on the table when the council holds its monthly workshop session Wednesday night.

So are renovations to the mothballed Senior Center and the swan song of Business Administrator Ziad Shehady.

Here’s what’s on the agenda.

• The council, or a majority of its members, appears ready to start talking about empaneling a charter study commission to review the borough’s 113-year-old form of government and possibly pave the way for nonpartisan elections.

The six-member council, all Democrats, had remained largely silent on the issue until a party schism erupted this year. That set the stage for the first contested primary election in recent memory, on June 8, when two incumbents, Hazim Yassin and Kate Triggiano, are being challenged in their bids for second terms by candidates with the backing of the local party regulars.

Along the way, Triggiano and Yassin and two other council members, Kathy Horgan, joined Mayor Pasquale Menna in calling for a charter review, and leveling fire art fellow councilman and party Chairman Ed Zipprich, who they said rules by “boss politics” and has created “total dysfunction” on the governing body.

Putting a review commission on the agenda is the first step toward a possible voter referendum on adopting a new form of government. Among the options is a so-called “strong mayor” model, in which the mayor effectively manages daily operations of the municipality, and the council is expanded to seven members.

• Also among the issues dividing the self-styled “council majority” from the minority of Zipprich and Councilman Michael Ballard is the future of the Senior Center , on Shrewsbury Avenue. The building has been closed for two years because of a burst pipe.

Last week, the Redevelopment Agency endorsed a plan to restore the center, with some additional improvements that fall far short of other options the agency considered in terms of remodeling and cost. Now, the council must turn its attention to authorizing detailed plans and financing for the work, estimated to be in the area of $1.6 million.

• The meeting is expected to be the last for Shehady, who’s departing borough employment Thursday after three years in the top unelected post. He resigned last month to take a job in the private sector; he hasn’t said where, and declined a redbankgreen request for an exit interview.

The council has appointed police Chief Darren McConnell to serve as interim administrator while a search is conducted for a permanent replacement.