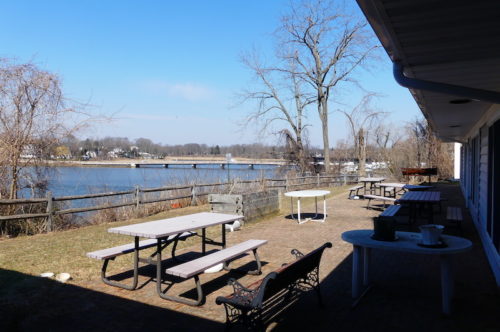 The backyard of the mothballed Senior Center overlooking the upper Navesink River. (Photo by John T. Ward. Click to enlarge)

The action could defuse one of the hottest issues in a contested Democratic race for two council seats just six weeks before a primary vote.

Based on the recommendation of a three-member subcommittee, the Redevelopment Agency voted unanimously to “proceed with the renovation of and modification [to] the Senior Center at its existing site, with substantially the same configuration” as at present, said subcommittee member Wilson Beebe.

The center, on Shrewsbury Avenue overlooking the Navesink River, has been out of commission since it was damaged by a fire suppression system leak in early 2019.

The endorsed plan, which also includes upgrades to the air conditioning system and other utilities, was chosen over other options under consideration, including a $9.8 million plan to rebuild the center as a two-story structure above an expanded parking lot to incorporate a recreation center for use by borough residents of all ages.

Beebe said the recommended plan was estimated to cost $1.6 million, and would add about $75,000 a year in annual debt service when completed.

The recommendation is expected to be taken up by the council, whose members, while all Democrats, had split sharply in recent months over how to immediately address the fate of the Senior Center, among other issues.

Four council members, including two who are up for re-election, advocated letting the Redevelopment Agency proceed with its review of borough facilities before committing to any action on the center.

Two others, including party Chairman Ed Zipprich, pushed a “fix it now” solution that was the subject of several public rallies.

The issue became a recurring flash point that led to the first contested council primary race in recent memory. On the June 8 Democratic ballot are incumbents Kate Triggiano and Hazim Yassin, both seeking second terms; and political newcomers Bruce Maida and Jacqueline Sturdivant, backed by Zipprich and the local Democratic organization.

Triggiano, a member of the Redevelopment Agency, said she was “happy to hear that we’re going forward” with the repair plan after Beebe spoke.

“I like that it includes the needs analysis” conducted by the agency, she said. “I think it’s always great to do your due diligence.”

No other committee members spoke in detail about the proposal, and no one from the public offered any comment on the center plan or any other agency matter.

In light of its recommendation regarding the center, the subcommittee also recommended, and the full committee agreed, to table any discussion of a new recreation facility at Count Basie Fields.

Among the options under review was one that would incorporate a new facility for seniors into a building with two indoor basketball courts at that location, between Drs. James Parker Boulevard and Henry Street.

“We’re doing that because, once you separate the Senior Center out from the Count Basie Park proposal, what’s left, the residual recreation proposal, appears to have limited utility for the estimated cost,” Beebe told the agency.

According to an estimate provided to the committee by an architect and discussed at the agency’s March meeting, that plan could cost about $8.7 million, while removing the Senior Center from it would reduce the cost to about $5 million.

“And while we didn’t take formal public testimony on the matter, we didn’t hear a lot of enthusiasm for enclosing the two outdoor basketball courts at the park suggesting that any future consideration would probably need to re-examine the purpose of such a facility, and maybe the location,” Beebe said.

In addition, he said, the group also agreed that focusing on plans for the borough’s severely dilapidated public works yard on Chestnut Street was “more imperative.”

Following the 19-minute meeting, the agency went into a closed-door executive session to discuss, among other matters, finding a new, part-time executive director.

The current holder of the position is Ziad Shehady, who announced his resignation from the agency in February and his resignation as borough business administrator earlier this month. His last day on the borough payroll is May 6.