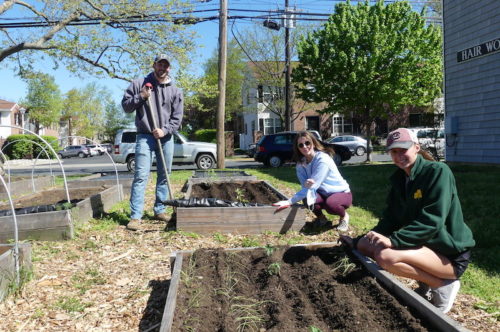 On a vacant lot in Red Bank, students from Red Bank Catholic High School are mixing the ancient lessons of agriculture with new technology to help tackle food insecurity amid a global pandemic.

They’re also hoping to create a new model for food-sharing. 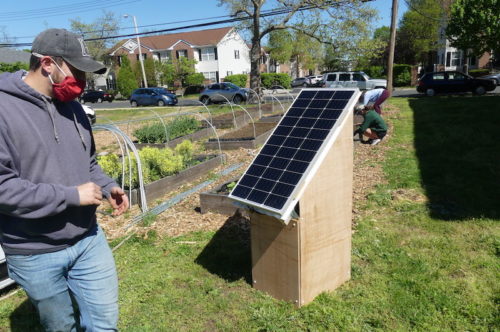 Nesci with the solar-powered irrigation pump controller designed and built by students for the project. (Photo by John T. Ward. Click to enlarge.)

On a chilly morning last Saturday, RBC seniors Siobhan Hempstead and her twin sister, Brigid, of Fair Haven, were on site, digging in for their second season on a patch of ground between Lunch Break and the building that houses the Hair Works salon on Drs. James Parker Boulevard.

“It’s a lot more work than I thought,” said Brigid, as she planted green onions, tomatoes, cucumbers and potatoes.

She recalled harvesting Romaine lettuce from then-covered beds last December as snow lay on the ground. “It was cold,” she said.

What was her concept of where vegetables came from before then?

“Kids today really don’t understand where their food comes from, how much work goes into it,” said science teacher and project leader Bryan Nesci. “Before this, they never were really in a garden. They’re plugged into technology and they don’t have to question anymore where things come from or how they’re done.”

“We’d just go to Acme to get them,” said Brigid.

Nesci launched the program, dubbed Gardens Growing Faith, a year ago as a Capstone project for seniors. It originally called for the construction of a 24-foot-by-70-foot greenhouse on the site.

The COVID-19 pandemic hosed that idea, and was scaled back last August to 12 raised beds. Still, by the end of year, the students had harvested lettuce, kale, broccoli and spinach.

They pushed their luck with a cauliflower planting, which was ruined by frost, learning afterward that they should have tied the leaves on top.

“That’s what gardening’s all about,” said Nesci. “You try something new, it doesn’t work, and then you try again.”

Along the way, Nesci realized that his students could work with other organizations or even corporations “who have space that’s wasted” with open land to help start gardens.

Some of the produce could be sold to restaurants, to help sustain the program, and the rest donated to organizations that help feed those who need free meals, said Nesci, who has a background in engineering ant teaches advanced placement physics, calculus and computer-aided design and programming.

“It’s a different way of looking at our food system,” he said. “The idea is to try to build a more redundant food system: lots of small, market gardens that have a giving aspect to them.”

Nesci has created an umbrella organization, called Gardens Growing Faith which already has charitable organization status in New Jersey. IRS 501(c3) tax exemption is in the works, he said.

Another garden is planned for the Luther Memorial Church on Route 537 in Tinton Falls. And the YMCA of Greater Monmouth County on Maple Avenue reached out to Nesci in the hopes of building a garden on a quarter-acre of ground next to the outdoor basketball and tennis courts, he said.

Meantime, the Drs. Parker lot is a temporary home for Gardens Growing Faith: Lunch Break plans to develop the site. It also isn’t served by electric or water utilities. So Nesci had students in his computer programming classdesign and build a solar-powered controller that will use rainwater from the roof of the Hair Works salon next door, stored in a 250-gallon cistern, to irrigate the beds.

“This is not just a garden,” said Nesci. “This is a learning lab. And the best part about it is that this learning lab creates food for people.”

“It feels good to know that people are getting the food we’re growing,” said Siobhan.

The program has attracted a few volunteers who are unaffiliated with RBC or Lunch Break, said Nesci. Others wishing to lend a hand can contact him through the website.