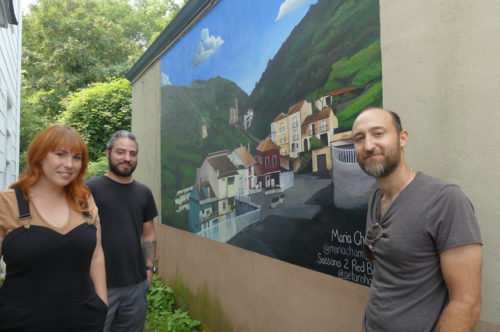 Before they began resettling in Red Bank in 1895, Anthony Jude Setaro and Doug Booton’s ancestors lived for at least 400 years in Sassano, a village in Italy’s Campania region.

Now, a bay window at the family’s Oakland Street homestead frames an idyllic vision of a faraway place that to the new owners still qualifies as home. 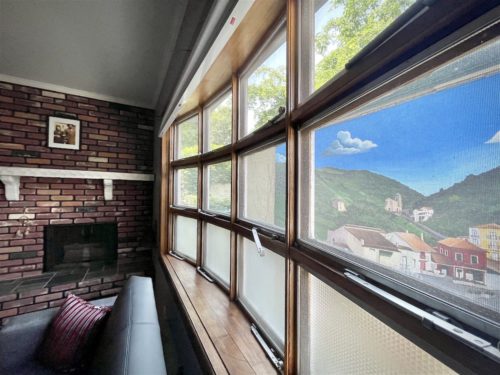 A view of the mural from the home’s family room. (Photo by Anthony Jude Setaro. Click to enlarge.)

Since 1934, three generation of Setaros have lived in the house at 137 Oakland Street, including its last occupant, and last-surviving sibling among 11: Dorothy “Dot” Setaro, who spent her entire 84 years there.

After her death, in February 2020, Setaro and Booton – cousins by virtue of sibling grandfathers – acquired the property from her estate and undertook a top-to-bottom remodeling.

The house came with a trunkful of memorabilia, including photos of people who were obviously relatives that neither of the cousins could identify, said Setaro. Going through it all, he and Booton realized how much they didn’t know about their own heritage.

“So we went super-introspective during COVID,” he said.

Setaro, 41, and Booton, 39, soon found themselves down the rabbit holes of Ancestry.com, the Red Bank Register online archive and a hive-mind genealogical research project called the Sassano Project. There, said Setaro, are church and other records of his ancestors dating to the 1400s.

By the first half of the 20th century, as families named Mazza, DeLisa, Stavola and more came over from Sassano, “this was little Italy,” Setaro said.

Staring out the family room window that faces the stucco-covered back wall of a neighbor’s garage, he got the idea for a mural, “to pay tribute to everyone who came before us,” Setaro said. The owner of the garage gave his blessing, he said.

The mural, created from Google Street Views and painted by Aberdeen artist Maria Chamra, captures an inviting view of Sassano. It depicts narrow, winding streets against a verdant green hillside; halfway up the hill is a church, Chiesa della Madonna del Carmine, that Setaro believes is the model for St. Anthony of Padua Church, just a block away on Bridge Avenue.

“The mailman and FedEx guys kept stopping by to check on the project,” said Chamra, who documented the 10-day painting process on Instagram. Though some of the colors are enhanced, “I tried to keep it as true to life as I could,” she said.

In the process, Chamra, who’s also of Italian heritage, came to feel as though she was in Sassano. “How could you not? I was studying it so much,” she said.

Now, with the restored house, mural and genealogical project, “we’ve become stewards of the family history,” said Booton, “and we’re happy to do that.”

For Red Bank-area ‘Sassanesi,’ or people whose ancestry connects them to Sassano, he and Setaro have created a private Facebook page to share information and memories.

Visitors who wish to see the mural are asked refrain from entering the property, but it is visible from the sidewalk out front.