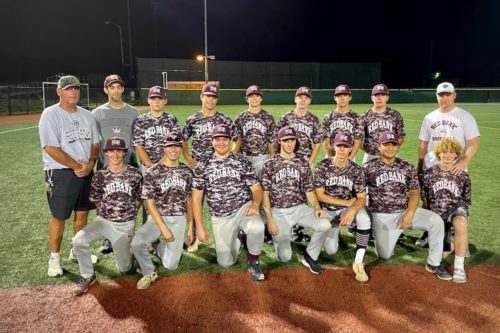 This summer, Red Bank Parks and Recreation proudly sponsored a 16-under team in the USABL summer league. Made up of Red Bank residents and/or students, the team was named the Red Bank Raiders.

The seeds to this team were sown last summer as Covid-19 canceled all high school and summer league baseball. Red Bank Recreation was able host high school players for practices and play inter-town games that started in July and
carried into the fall while following all Covid-19 safety protocols.

Through grit and determination, the squad ended up turning in an 11-0 season and had a lot fun playing together as a team. Hosting the championship game as the #1 seed on Tuesday July 27th, the Red Bankers defeated the Old Bridge Lighting 7-4 and won the USABL 16U Central Division Championship.

The team’s success was led by its impressive pitching staff, who turned in a team ERA of 2.37 and an opponents batting average vs of .164. Jack Glassberg was the #1 starting pitcher, going 5-0 with an ERA of 1.96, and batted .294, leading the team with two triples.

Closer Jackson Hyman had 5 saves and gave up 0 runs and only 1 hit while striking out 20 batters in 8 innings of work. Jackson also played SS and hit .277.

The Raiders Offense was also impressive, with the team batting average of .374. The top hitter was outfielder Tim Kelly, who hit .636 and led the team with 14 hits, 16 runs, and 5 doubles. Utility Infielder Ryan Robinson also hit an astonishing .642 and led the Raiders with 10 RBI’s. First baseman Nicky Gandolfo hit .667, with key RBI’s in the playoffs.

Catcher/3B Gus Dal Pra continued his hot hitting from the regular high school season when he batted .440 as an All-B-North selection and ended up hitting .390 this summer. Gus actually never struck out the entire summer.

3B/1B/Catcher Hank Dal Pra had clutch hits in the playoffs and hit .360 overall and was a top run scorer with 10.

The Raiders also had a lockdown defense and in the outfield is where the team shone. Centerfield was patrolled by James White, who chipped in a .250 BA at the plate. LF Bryan Cruz also hit .250, played flawlessly in the field and jumped into the infield when needed. Right fielder Jake Cohen was on anything hit his way and was lightning on the base paths.

Another big part of the Raider team was its balanced line up. OF/2B Mike Freeman hit all over the lineup and always produced, hitting .466 over the season. As the summer got hotter so did he, and ended up knocking in some keys runs during playoff time.

Another solid bat was OF Mike Polloway, who hit .280 and was solid in the field and teammate #1.

This team will stay together this fall and look to play more solid baseball but the #1 goal is to prepare for next spring’s high school baseball season. Like the rest of our country these young men have faced a lot of adversity over the past 18 months. Even with the game they loved ripped from them, they made the best of it. Yes, they had to go old school do it on their own, but in the long run they will be better for it. Red Bank is proud of them and happy to call them our sons.

Twitter
Posted on July 30, 2021 at 6:27 am, filed under All Good, Baseball, Children, RED BANK, Sports and tagged baseball, nj, red bank, usabl. Bookmark the permalink. Follow any comments here with the RSS feed for this post. Trackbacks are closed, but you can post a comment. Email this story.
PREVIOUS: RED BANK: SAXUM SEEKS TAX BREAKS NEXT: RED BANK: BALLARD OPPOSES SURPLUS USE
redbankgreen.com