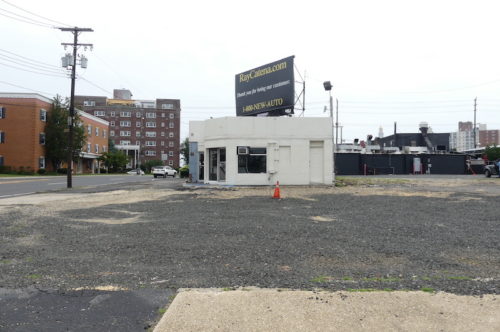 A long-idle gas station at Riverside Avenue and Bridge Avenue will be included in a second review of the designation for the former VNA headquarters, at left above. (Photo by John T. Ward. Click to enlarge)

The would-be developer of a massive apartment complex at Red Bank’s northern tip is now angling for tax relief in order to build the project.

Consultant Ken DeRoberts told the borough  redevelopment agency Tuesday that Saxum Real Estate has submitted a new plan for the former Visiting Nurse Association property that’s driven by a need for a PILOT, or payment in lieu of taxes agreement. 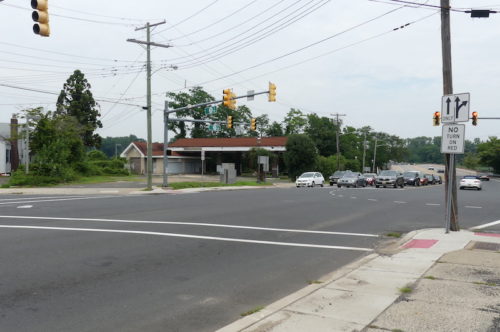 The former Exxon station at the foot of the Route 35 Cooper’s Bridge will also be included in the review. (Photo by John T. Ward. Click to enlarge)

The Parsippanny-based firm won planning board approval in December, 2019, for 210 apartments at the vacant VNA site, located on Riverside Avenue between Bodman Place and Bridge Avenue.

After studies, negotiations and hearings leading up to that approval, the borough council gave the 2.7-acre site an “area in need of rehabilitation” designation under state law. The firm now seeks “area in need of redevelopment” approval, which would open up the possibility of a PILOT plan, said DeRoberts.

“This is primarily a financially driven plan, especially given, over the past year, the significant increase in construction materials, ” DeRoberts told the agency at a 20-minute meeting. Saxum’s request “is based on the fact that they need a PILOT from the municipality in order to make the project economically viable.”

PILOTs generally call for tax exemptions for a specified period, up to 30 years, on site improvements, replaced instead by specified payments “in lieu” of taxes that, unlike standard property tax levies, the town would not have to share with school districts.

DeRoberts said Saxum is not seeking an increase in the number of approved units nor to reduce the number of affordable units – 32 – required under the planning board’s existing approval.

“The economics have changed. The scale and the scope of the project has not,” he said.

DeRoberts said he, along with new agency executive director Cherron Rountree, planning director Shawna Ebanks and the borough’s redevelopment attorney plan to meet with Saxum principals “to drill in and begin to look to the financials.”

Among the questions to explored is “whether they’re eligible for a PILOT. We’ll look at their assumptions versus standard industry construction costs, et cetera.”

Before the council can consider a change in designation, a redevelopment study first has to be commissioned and reviewed by the planning board, said DeRoberts.

Ebanks said the study request would be on the board’s August 16 agenda.

Two nearby properties not owned by Saxum would also be included in review, both long-vacant sites of former gas stations: an Exxon, on the opposite side of Route 35, where a never-built Hampton Inn won board approval in February, 2017; and an independent station at the southeast corner of Riverside and Bridge avenues.

Ebanks did not say why those sites were included in the review intiated by Saxum, but said they do appear to meet two of the criteria for redevelopment designation: blight and underutilization.

Since the 2019 approval, Saxum has also acquired the 30-space parking lot on the west side of Bodman around which its apartment project was to be built, in a horseshoe shape. Park Ridge LLC, owner of the Colony House apartments across the street, has sold the lot to Saxum, DeRoberts said.

Monmouth County property records indicate a Saxum entity refinanced an existing $6.5 million mortgage in February in connection with the deal, adding $2 million to its debt.

The addition of the half-acre fill-in to the “notch makes it a much more congruent property,” said DeRoberts.

Park Ridge had objected to Saxum’s development proposal at the planning board, and later sued the board and Saxum’s 176 Riverside LLC, claiming the board that it should not have had jurisdiction over the proposal because it departed from the terms of redevelopment plan for the site that had been adopted by the borough council in December, 2018.

That lawsuit, filed by Red Bank attorney Ron Gasiorowski, continues in Superior Court in Freehold, according to court records. Park Ridge principal Charles Silberberg did not respond to a redbankgreen request for additional information, including the impact of the sale on tenant parking at the Colony House.

At the meeting, Rountree’s first in her new post, she went unintroduced, and barely spoke.

“I’m still catching up, but I look forward to having a lot more to say at the next meeting,” she said.

Rountree, who’s also Holmdel’s township administrator, was appointed to the post, at an annual salary of $15,000, on a 3-2 council vote last week. She replaced Ziad Shehady as agency executive director.

In May, Shehady also vacated the job of borough business administrator, which is being filled on an interim basis by police Chief Darren McConnell.