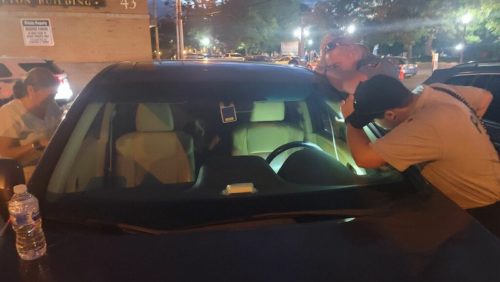 A dog needed a Red Bank police assist getting to a jazz concert after it locked itself inside a car Thursday night, its owner told redbankgreen.

Margaret Fitzpatrick of Middletown said she parked her car in a lot alongside English Place intending to to take Corey, her 9-year-old beagle/basset hound mix, to the Jazz in the Park concert in Riverside Gardens Park that evening.

But as she walked around to the passenger side to get the dog, Corey jumped on an armrest, accidentally tripping the door locks, Fitzpatrick said. The keys, and Fitzpatrick’s cellphone, were inside the vehicle.

“I was planning on getting him out of the car then picking up the bag” that contained Corey’s water and bowl, along with the keys and phone, she said. “I never dreamed he could hit the lock button.”

With the distressed animal “howling,” Fitzpatrick summoned nearby police, who spent 30 minutes to unlock the car with a wire, Fitzpatrick said.

Jazz in the Park is scheduled to wrap up its summer run this Thursday night with a show by the Radam Schwartz Organ Big Band.

Posted on August 23, 2021 at 11:00 am, filed under Animals, Featured, Pets, RED BANK and tagged dog, nj, Pets, police, red bank. Bookmark the permalink. Follow any comments here with the RSS feed for this post. Trackbacks are closed, but you can post a comment. Email this story.
PREVIOUS: RED BANK: FASHION, GOLF & MORE IN CHURN NEXT: RED BANK: RALLY DEMANDS VAX/MASK CHOICE