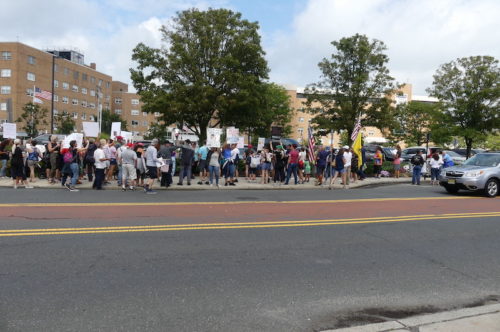 About 150 proponents of “choice” regarding COVID-19 vaccines and masks protested outside Riverview Medical Center in Red Bank early Monday afternoon.

The midday protest followed a rally in Riverside Gardens Park, where god, the U.S. Constitution and the Second Amendment were also invoked. 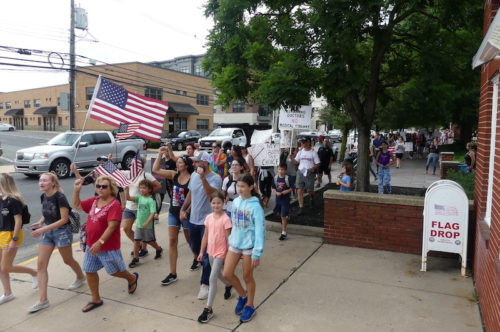 Chanting “my body, my choice,” rally participants marched less than half a mile east from the park to the hospital, where workers were hailed as pandemic-fighting heroes by emergency personnel 16 months ago.

There, as hospital employees and ambulances came and went, two women who declined to give their names helped lead the crowd in chants of “we will not comply” and “freedom.”

The event was organized by New Jersey for Medical Freedom, said one of the two, who identified herself as a healthcare worker. The point of the rally, she said, was to emphasize that government does not have the right to mandate vaccines for which no one takes accepts liability in the event of adverse effects.

“Let them put their money where their mouths are,” she told redbankgreen. “If they would, maybe there wouldn’t be hesitancy. But the people here aren’t hesitant. We know too much.

“We’re not forcing our views on anybody,” she said. “We stand for freedom.”

“Your masks don’t work,” a man carrying an “unmask our kids” sign repeatedly shouted at a hospital employee in scrubs and a face covering.

Under an executive order Governor Phil Murphy signed August 6, all private and public healthcare workers must be vaccinated by September 7 or get tested for the virus at least once a week.

The order came three weeks after Riverview’s parent company, Hackensack Meridian Health, told its 35,000 employees statewide that they must receive at least one dose of a COVID-19 vaccine by November 15 or face possible termination.

On Monday, Murphy announced he would extend the directive to all state employees, effective October 18.

Earlier, at the park, a woman speaking though a megaphone told the crowd that healthcare workers are in danger of losing their livelihoods, despite having sacrificed during the worst of the pandemic.

“They saved your families’ lives,” she said. “They held their hands when no one was there. They threw up, they didn’t eat, they were sick, they didn’t pee. They did all they could to save your family. And now we’re putting their backs against the wall, threatening what they love. They love being nurses.”

Police Chief Darren McConnell told redbankgreen that no permit application for use of the park and the march was filed.