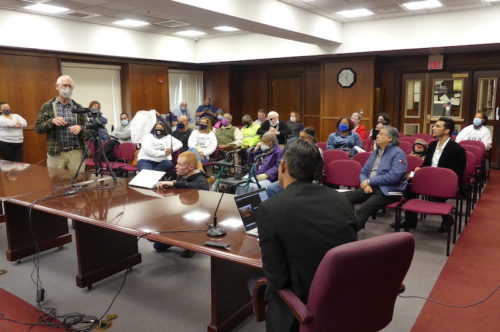 Suggestions ranged from small (add a door buzzer) to large (dig a basement). 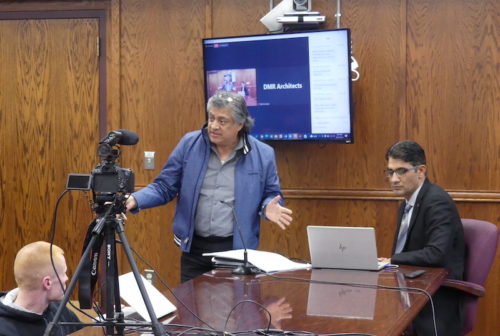 The afternoon and evening sessions, held in person in the council chamber at borough hall and streamed via Zoom and Facebook, centered on brief presentations of architectural plans, followed by public question and comments.

The one-story Senior Center, on Shrewsbury Avenue, has been closed since a January, 2019 leak of the fire suppression system. Since the easing of pandemic limitations on social gatherings in May, seniors have been meeting in borough-rented space at Trinity Episcopal Church on White Street.

Pradeep Kapoor, a partner at the architecture firm DMR Architects, outlined repair and upgrade plans he estimated would cost $1.8 million.

They include replacing the existing windows and siding, which DMR project manager Fernando Robledo said are energy-inefficient; relocating heating and cooling systems from the attic; and overhauling restrooms and doorways to comply with changes to the Americans With Disabilities Act.

The plan also includes an option: the installation of movable dividers that would turn a large meeting room into two or three smaller rooms. The dividers account for an estimated $80,000 of the expected cost, Kapoor said.

The plans call for no changes to the parking lot or patio overlooking the Swimming River, Robledo said.

Amid complaints that the sessions should have been held earlier in the process, and that the display of materials was hard to see on the room’s single television screen, residents offered suggestions.

Former council member Cindy Burnham, of Wallace Street, said a non-functioning gas fireplace in the main meeting room should be repaired, rather than eliminated.

Among the other recommendations: a security buzzer at the front door; ceiling fans; a cathedral ceiling.

Architect Jerome Morley Larson of Shrewsbury Avenue derided the presentation “useless,” and called for the addition of a basement and “much bigger deck” outside.

Tiffaney Harris, a leader in the “fix it now” drive for the Senior Center, told redbankgreen afterward that she was “very pleased” with the suggestions.

The plans are “ready to go out to bid” as-is, but subject to revision by the council, based in part on resident input from the sessions, acting Business Administrator and police Chief Darren McConnell told the audience at both sessions.

Once the plan is finalized, Kapoor said he recommended building contractors be given a month to submit bids. The council would then award and finalize the contract, which he said could take another month or two.

Construction is expected to take another five months, he said.