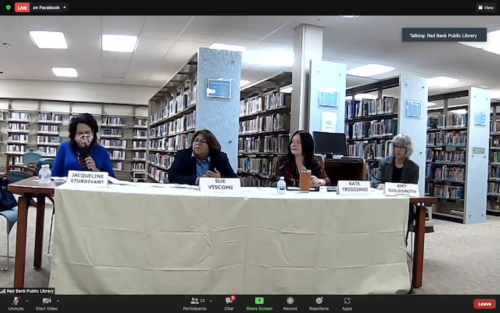 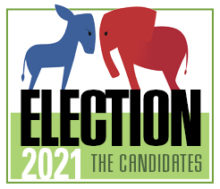 Organized as the West Side Community Group‘s 26th annual Candidate’s Night – after a skipped 2020 edition because of the COVID-19 pandemic – the event was hosted at the Red Bank Public Library, where the candidates sat together at a table and moderator Amy Goldsmith read from questions submitted in advance.

Running are Democrat Kate Triggiano, seeking a second three-year term; Democrat and newcomer to Red Bank politics Jacqueline Sturdivant; and independent Sue Viscomi, a member of the borough board of education.

Sturdivant and Triggiano are not on a unified ticket. And for the second year in a row, local Republicans will not have any candidates on the November 2 ballot.

Among the highlights of the 90-minute session, which drew about two dozen viewers on Zoom:

• Cited her education, including an MBA, and professional background in the corporate world, saying she has “managed budgets” of up to $1.5 billion.

•  Said it was “very frustrating to see my taxes going up every year. I think the underlying issue is Red Bank needs to put its finances in order.”

• Said the borough needs to make “significant changes to our infrastructure in terms of water, sewer, electric grid” so they’re “fully reliable.” Solar panels, electric vehicles and windmills should be considered, she said.

• Asked why she thinks having the council make administrative decisions would be “more efficient” than leaving them to a professional administrator, Sturdivant said the council had tried the latter approach, and “it gave a lot of power to one person.

“I think it’s better for the council to be making those decisions because you have input from all of the town, not just one person,” she said. “It’s decisions being made by people who are actually elected to those positions, so they have the best interest of Red Bank in place. The current authoritarian kind of decision-making of the business administrator may not be serving Red Bank as efficiently as it should.”

In one of the few moments of pushback among the candidates, Triggiano asked Sturdivant to cite examples of “authoritarian” decisions. Sturdivant replied, “off the top of my head, I can’t think of one specifically.”

• Highlighted her “leadership” on a number of fronts, including environmental issues such as the plastic film recycling program. The environment, she said, is an area “where you can truly initiate change” at the local level; “there is a trickle-up effect.”

• Addressed what she called “misinformation” about Payment in Lieu of Tax agreements to spur redevelopment, saying that Saxum Real Estate had never formally proposed a PILOT for the former VNA site on Riverside Avenue, and that negotiated tax deals had been used successfully in town.

• When asked if she would support the recommendation of a charter study commission even if it called for continued partisan elections, Triggiano said: “I respect the process, and I’ve been made fun of for saying that in the past; it’s not the most glamorous thing to say. But when we were just talking about respecting other people and working as a team, part of that is respecting a study.

“I have not said that I am, you know, strictly for nonpartisan [elections],” she continued. “I have said that I am for looking into this, and that something about what we’re doing is not working, full stop, and that we need to be open to exploration and open to taking a deeper look into our government.”

• Pitched herself as the “underdog” in the race and spoke about her decade’s worth of attendance at government meetings, which she video-records and posts on Facebook.

• Regarding the environment, said “let’s take care of the simple stuff first,” such as “garbage in the street” making its way into storm drains.

A video recording of the event can be viewed on the library’s Facebook page.

In addition, here’s what the candidates had to say about the issues and their qualifications to tackle them in these Q&As with redbankgreen:

Also, check out our Q&As with all 11 candidates for the Red Bank Charter Study Commission here.