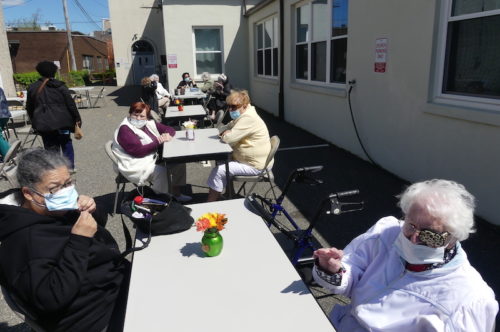 Apart for months, Red Bank seniors enjoyed a pandemic-era get-together outside the temporary home of the borough Senior Center Thursday.

“It’s so nice to see everyone and talk, even if you don’t know everyone,” said 92-year-old Dottie Ferris, a resident of the Wesleyan Arms senior apartments on Wall Street, as she sat at a table outdoors. At home, “all I do is watch TV and eat,” she said. 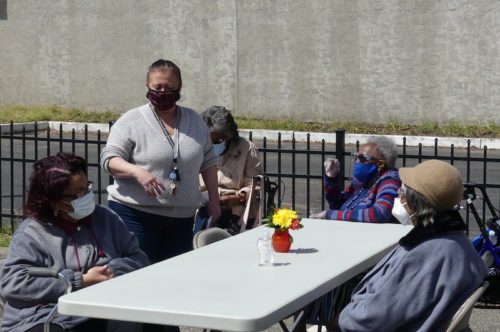 Senior Center Director Jackie Reynolds speaking with some of the attendees. (Photo by John T. Ward. Click to enlarge)

“It’s nice to see people again,” said Theresa Stravic, of Prospect Avenue. “It’s been a long time. That’s one of the biggest things.

Socializing “gives new life to the old life,” she said with a laugh.

The event was the first at which seniors were able to assemble since last September, when they met for bingo and other activities in Eastside Park, said Reynolds.

In keeping with COVID-19 safety protocols, the gathering was held in the parking lot of Trinity Church on White Street. Earlier this year, the borough leased the church’s community room to serve as a temporary alternative to the center’s true home, on Shrewsbury Avenue, which has been shuttered for the past two years – first by a catastrophic leak, and later by a review of borough facilities.

Councilman Michael Ballard, who championed a drive to bypass the Redevelopment Agency review and immediately fix the center, showed up with a vase filled with roses for the seniors.

Consistent with the agency recommendation issued last month, the council is expected to introduce a bond ordinance to repair the center later this month. The work has been estimated to cost about $1.6 million, and take about five months to complete, once a contract is signed.

Senior Bernice Brunson told redbankgreen she was eager to resume visiting the Senior Center daily, “because that’s where I like to be. Everything is right there for you.

“They should never have kicked us out of there,” she said. “They should have repaired it right away.”

Hattie Walton came from her home in West Long Branch for the event, just as she used to travel daily to the center before it was closed, she said. In addition to maintaining a patio and garden overlooking the Navesink River, Reynolds and other center employees “spend a lot of time connecting with the seniors,” she said.

Weather permitting, a seniors’ walking club is scheduled to meet at Count Basie Fields and Eastside Park next Monday and Wednesday mornings, respectively, she said. And Senior Center employees plan to take two groups of up to five members shopping at Foodtown, also Monday, Reynolds said.