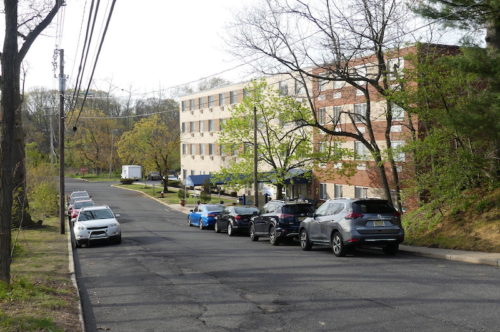 An amendment to the parking ordinance would ban parking on the west side of Chapin Avenue, seen at left above. (Photo by John T. Ward. Click to enlarge.)

The semimonthly session of the Red Bank council Wednesday night includes a police retirement and some hires, as well as a parking ban.

It also includes approval of a settlement in a type of tax appeal case that enraged commercial landlords two years ago.

Here’s some of what’s on the agenda.

• Accepting the retirement of Patrolman Patrick Kennedy after 29 years on the police force, effective June 1.

• A proposed ban on parking on the west side of Chapin Avenue. [The document says the prohibition extends to the southern end of the street, but Chief Darren McConnell said that’s an error, and should say “northern.”]

“We’re having some congestion issues” and concerns about emergency access to the Hackensack Meridian Rehabilitation Center on the east side of the street, McConnell said in response to a neighbor’s inquiry at the council’s workshop session last week.

•  Also on the agenda is a settlement of an “affirmative” or “reverse” tax appeal that will boost the tax bill on 1 Bridge Avenue, also known as West Side Lofts, by $5,554 for 2018.

The council hired firm of Blau & Blau in 2018 to pursue the so-called “reverse appeals” against commercial properties it believed to be undertaxed by the borough’s own assessor, Mitch Elias,. The aim was to “turn the tables,” in the words of Mayor Pasquale Menna, on large-scale commercial property owners who routinely file tax appeals.

But a year later, the council scuttled a plan for a second round of reverse tax appeals after it was bombarded by complaints from commercial property owners. The 2018 cases, however, were permitted to continue.