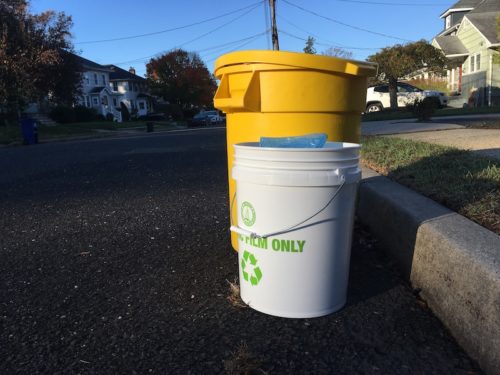 A one-year pilot program to encourage the recycling of plastic film waste enters its second month in Red Bank Wednesday.

Despite some glitches, the first was “a success,” said the borough official overseeing it, as he faced questions about costs. 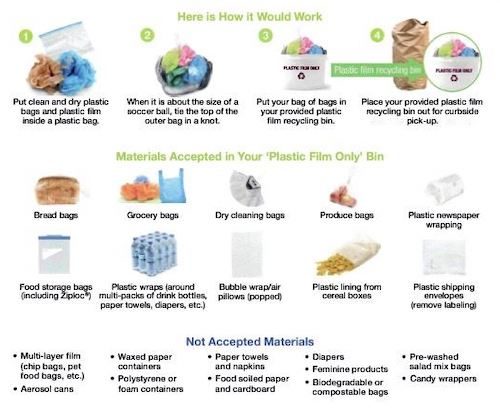 A sorting guide identifies products that can be recycled under the program. (Click to enlarge.)

Regularly recycled materials – glass bottles and jars, metal cans, mixed paper, cardboard, and # 1 and 2 plastics – continue to be picked up every Wednesday by DeLisa Demolition, the borough’s contract hauler.

But under a pilot program that began earlier this month, plastic bags and plastic film products are to be collected on the first Wednesday of the month by public utilities department workers.

Residents are encouraged to separate everything from dry-cleaning bags to boat wrap, putting them at the curb in dedicated receptacles.

Under the agreement with consumer products giant S.C. Johnson & Sons in June, Red Bank became the fourth New Jersey municipality to recycle film packaging. The company agreed to provide up to 1,800 pails and up to $6,600 to cover costs of mailings about the program.

On November 3, the first day of collections, public utilities Director Cliff Keen told the borough council that “a large amount of material” was picked up, though it had not yet been weighed.

The plastic was being stored at the public works yard on Chestnut Street before being transported to Tinton Falls-based Mazza Recycling for processing, he said.

But while the program “has a positive environmental impact,” Councilman Ed Zipprich said, he questioned the cost.

“It looks like it’s going to be an expense rather than a revenue source,” he said, adding that, “we’ve sort of gone full circle and we’re back in the trash business” after shifting trash and general recycling pickups to DeLisa six years ago.

But except for metals, “at this point, there isn’t much that’s a revenue source any longer, unfortunately,” Keen replied. The cost of recycling plastic film is expected to be low based on the low weight of the material, he said.

Keen said DPU employees had spent about six hours on the first collection, with about 350 homes participating.

“When it comes down to it, I think six man-hours a month is worth it,” he said. “As we double, triple the number of buckets out there, it doesn’t mean we’re going to double or triple the man-hours, because if they’re already on the street, moving from one neighbor to the next, it’s not a whole lot of extra time.”

Keen said he’d had “several conversations” with DeLisa about the possibility of shifting the collections to that company, but “right now, the cost analysis says that we should be doing this ourselves for a little bit, and seeing at what point this becomes cumbersome for us.

“If it triples in time for next month, we might be having a different conversation,” Keen said.

Though the program allows for recycling of boat wrap, Keen said Irwin Marine, the town’s largest marina, will continue having its film waste collected under an existing private arrangement.

Residents can obtain dedicated pails from the public utilities department.