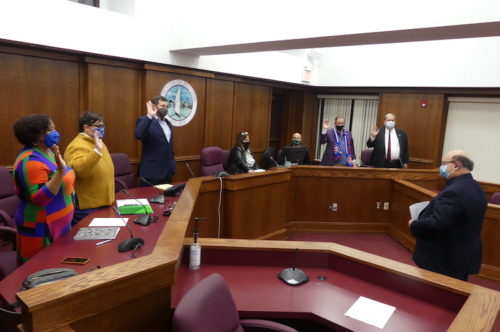 A study that could result in an historic overhaul of Red Bank governance, and imperil three decades of Democratic party dominance, got underway Tuesday night.

On the agenda of the newly empaneled Red Bank Charter Study Commission were nuts-and-bolts matters: requesting a budget, finding a lawyer and setting a meeting schedule.

On the unofficial agenda: learning to use the microphones. 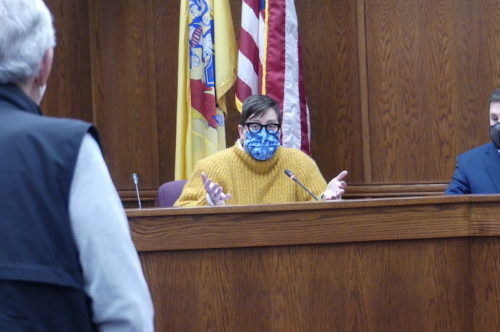 The nine-month study of the town’s 1908 “charter” – not the Red Bank Charter School, as some commenters have assumed on social media – could lead to a referendum on replacing the town’s borough form of government with one of multiple options.

It also could open the door to non-partisan elections, in which candidates who avoid party machinery have a better chance of making it onto a ballot.

They won their seats in the November 2 election, when voters approved a referendum calling for the study and chose the commission members from 11 candidates.

“We’re in a middle ground,” said Okeson. “We’re not politicians. We’re serving for our residents.”

In its first series of actions, the commission:

• Agreed to request a $50,000 budget from the borough council, with four-fifths of that amount expected to go to legal costs.

• Agreed to seek proposals for the legal work, at a target rate of $150 per hour, for a lawyer to attend meetings, provide guidance and write a final report.

• Proposed a twice-a-month meeting schedule: the second Thursday and fourth Monday (or fourth Tuesday), at 6:30 p.m. Those days were selected based on the availability of the council chambers. CORRECTION: The meeting dates were incorrectly reported in the original version of this post.

Several commission members expressed hope that in addition to the in-person sessions, the borough would provide a virtual option.

Blackwood said the study would consist of three phases: a review of the existing form of government; a look at other forms; and “taking it on the road” with a series of hearings to solicit public input.

As is standard in meetings in the council chambers, microphone management was an issue. This time, though, the tables were turned, as Menna, sitting in the audience rather than on the dais, called out “we can’t hear” as members spoke without turning on their mics.

That prompted Forest to remind his fellow members to turn on their mics when speaking: his was off as he said this.

The next session was slated for December 22, at 6:30, with approval of resolutions formalizing the above actions expected.