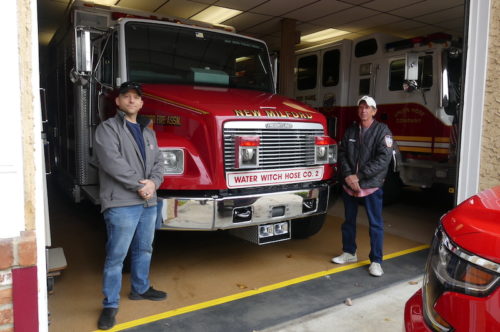 Red Bank’s volunteer firefighters have a new truck to help them rescue individuals trapped in cars or on the Navesink River.

And though it’s a used, 28-year-old vehicle, its $35,000 acquisition last month is being praised by officials as “huge” bargain. 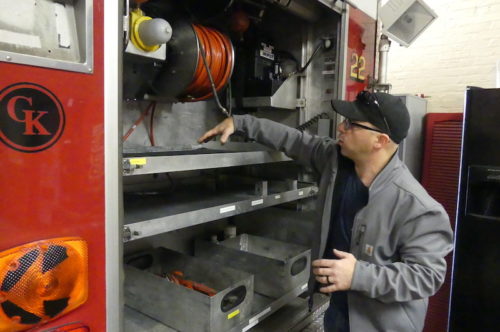 Though the chassis is a 1993 Freightliner FL70, “the engine and the motor train have all been replaced,” Acting Business Administrator Darren McConnell told the council at the October 20 council meeting, when the governing body authorized the purchase.

The truck was purchased from the Water Witch Hose Company in New Milford, Connecticut through a broker last month.

New Milford used it as a rescue vehicle, carrying tools for quick deployment such as the “jaws of life” used in car crash extrications, elevator entrapments and more.

“Everything the dive team needs to go into the water will be here: their scuba gear, their tanks, their tools,” he said.

Big bonus: divers will be able to change into and out of wetsuits inside the truck. Until now, that’s always happened in the open air.

“You can dress in the comforts of air conditioning in the summer or heat in the winter, as opposed to being outside, naked, getting ready to go into the icy cold or hot water,” he said.

In the past, the dive team has had to make do with a used van that barely ran and, later, a used postal truck that “would be making a left turn while you were holding the steering wheel straight,” said Holiday.

After five years, that was replaced by a “hand-me-down” rescue truck from First Aid, followed by another hand-me-down, from the fire police, he said.

Since the team’s inception in 1988, “we’ve always had something, and we’ve made it work, but it’s never been what we really needed it to be,” Ferraro said.

“What we’re getting out of this is two vehicles in one,” Ferraro said.

The purchase comes four months after the department took delivery on two new pumpers, at a combined cost of $1 million.

The rescue truck can also serve as a mobile command center in the event of a major event, with tabletop space for paperwork, computers and more that the department’s chief’s vehicles don’t provide.

“If we had ourselves a god-forbid situation where we’re at an incident for a long period of time, with other towns coming in, that’s where this would come in. This is where you’d organize that,” Ferraro said.

The deal came together quickly. After a member spotted the vehicle on the website of equipment broker Fireline, department heads met with McConnell on October 4 about the possibility of making the purchase.

McConnell said he might be able to find a way to pay for it, but told the firefighters to first check out the truck to determine if it was as advertised. A week later, Holiday, Ferraro and former Chief Alan Soden drove to New Milford.

“Honestly, it’s a phenomenal vehicle, and we would be silly not to jump on this,” Ferraro said he thought when he saw it.

McConnell told redbankgreen the funding came from unspent funds in “a bond ordinance adopted a number of years ago that included money for fire department improvements and upgrades.”

Councilwoman Kate Triggiano, a firefighter with the West Side Hose Company and public safety commissioner, called the purchase “an extraordinary win for the borough.”

Set-up for the truck, as well as new markings, is expected to take several weeks long. Meantime, the existing rescue vehicle is still available.

The fire department is seeking donations of marine equipment and cash to outfit the truck. More information can be found here.