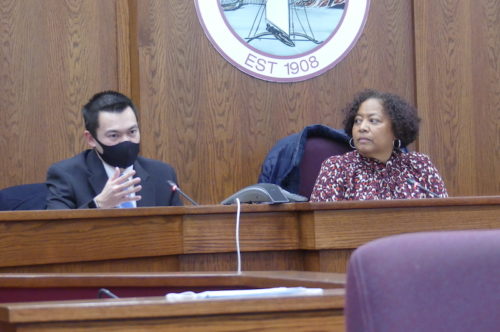 After two preparatory sessions, the Red Bank Charter Study Commission expects to begin digging into its task on January 13.

In the interim, the five-member citizen’s body has a “homework” assignment.

As its first order of business Wednesday night, after a one-minute executive session, the commission selected Michael Collins, of the firm King, Moench, Hirniak, Mehta & Collins, to provide legal guidance.

Collins, a resident of Navesink Riverside Residences and Marina (formerly Riverview Towers) on Riverside Avenue, is the township attorney in Holmdel. The township is also involved in a charter review.

The commission had previously set a target rate of $150 per hour for the assignment.

Chairwoman Nancy Facey-Blackwood then asked members – Mike DuPont, Ben Forest, Kate Okeson and Mark Taylor – to read a review of the borough’s form of government prepared by the Local Services Assistance unit of the the New Jersey Department of Community Affairs.

The document was not yet publicly available, but will be, Facey Blackwood told redbankgreen.

She suggested members use it “to come up with questions that we would ask various departments about the current form of government.”

Okeson asked if any borough officials could not be approached for interviews about government operations.

“The commission certainly is empowered to reach out to any individual,” Collins said. “There may be some strictures you’ll want to work through the administrator on, in terms of their ability to feel comfortable speaking despite their employment” he said.

Employees may also best be “privately approached” rather than interviewed in a public forum, he said.

The nine-month study of the town’s 1908 “charter” – not the Red Bank Charter School – could lead to a referendum on replacing the town’s borough form of government with one of multiple options.

It also could open the door to non-partisan elections, in which candidates who avoid party machinery have a better chance of making it onto a ballot.

In other business, the commission:

• Scheduled its next meeting for 7:30 p.m. on Thursday, January 13. The session may be virtual, depending on the trend in the COVID-19 pandemic.

Among other business, the commission expects to establish a schedule of two meetings per month.