A rendering of the proposed development, as viewed from River Road and Cedar Street. (M&M Realty Partners. Click to enlarge.)

Though its approval might appear preordained, a plan for new stores and apartments on the site of a former gas station in Fair Haven received nearly three hours of close scrutiny by the planning board Tuesday night. 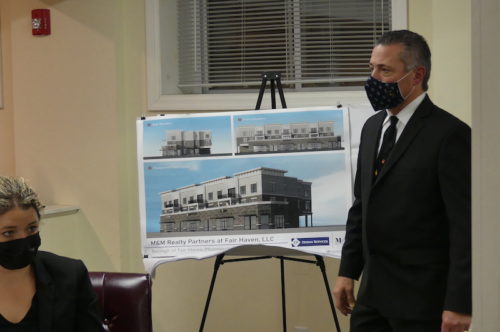 Ron Aulenbach addresses the board. Below, board Chairman Todd Lehder. (Photos by John T. Ward. Click to enlarge.)

The plan, by M&M Realty Partners, of Piscataway, calls for a three-story building at 626 River Road, which has been vacant since the Sunoco station there closed in December, 2011.

If approved and built, the project would be the borough’s first multifamily development in modern times, if not its history. Rejection would throw a wrench into a years-long effort to head off litigation over the town’s obligation to provide affordable housing.

M&M’s application, crafted to conform with a settlement with the Fair Share Housing Center over the borough’s affordable housing obligations, does not include requests for any variances, said its attorney, Doug Wolfson.

The plan calls for an entry-only driveway into the site from River Road, at the property’s eastern edge, and a two-way driveway on Cedar Avenue. Each apartment would be assigned two parking spaces, in a tandem arrangement, beneath a cantilevered portion of the building, Ron Aulenbach, the developer’s director of engineering and planning, told the board.

Additional parking would be provided along the site’s southern edge for shoppers.

No tenants have yet been signed for the ground floor, which “in the worst case” would be divided among three businesses, Aulenbach said.

The board’s detailed review included access for deliveries, landscaping, lighting and more. Board Chairman Todd Lehder pressed the builder to make the Cedar Avenue side more visually appealing, and to provide room for outdoor dining on the River Road side, should a restaurant become a tenant.

A proposed eight-foot-tall sign advertising the businesses and the yet-to-be-determined name of the apartment complex appeared to catch board members off guard.

“The compromise” regarding sign size in the negotiated settlement “is the one that bothered me the most,” Lehder said. He said he’d “feel a lot better if a kid on a bicycle could see over it.”

Snow management? Because there’s no place to put it onsite, it will be trucked out, Aulenbach said.

According to Wolfson, “there is groundwater contamination on the site.” Sunoco, which is responsible for the cleanup, is working with the New Jersey Department of Environmental Protection on the issue, he said.

After three hours of testimony, with questions and comments yet to be heard from the public, the hearing was adjourned to January 18, with a determination to be made about whether it would be in-person, completely virtual or a combination of the two.

Though Tuesday night’s session was originally to have been in-person-only, virtual access was arranged via Zoom and Owl Labs in light of a rising number of COVID-19 cases. Lehder said at least 35 users had tuned in remotely.

A handful of residents were present, all wearing masks. Among them was Neil Tirrato, owner of the house next door to the M&M site. He hopes to persuade the board to reject the River Road driveway, he told redbankgreen.

M&M previously proposed building a bank branch on the Sunoco site; that plan was withdrawn in the face of opposition in 2016.

Four years later, after an aborted effort by the borough itself to acquire the site for a new town hall, the council reached the settlement. That pact called for M&M to be permitted to build up to 14 apartments on the site, with two set aside for low- and moderate-income tenants.

Application documents can be found here.