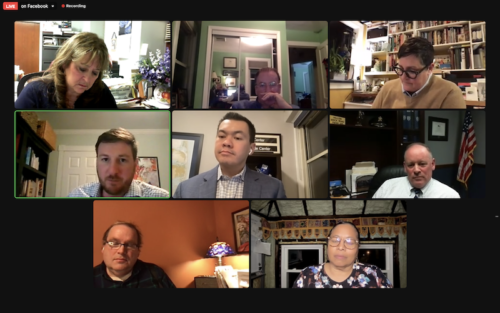 The executive authority given Red Bank’s appointed administrator may shift back to elected officials next week.

But will voters shift it back in November? Former borough administrator Stanley Sickels in 2018, above. Below, a slide from a presentation by a state official last month outlines the expansion of powers given the administrator in 2018. (Photo by John T. Ward. Click to enlarge.)

The question of how much decisionmaking latitude to give the town’s unelected manager is on the table before both the borough council and the Charter Study Commission.

Next Wednesday, the council is expected to vote on a proposed ordinance amendment to reset the responsibilities of the administrator to pre-2018 limits, undoing a change that delegated greater executive say to the position, particular in hiring for non-leadership positions.

The measure was introduced by Councilwoman Jacqueline Sturdivant, who campaigned on the change going into her election last November, and has support from councilmembers Michael Ballard and Ed Zipprich.

Sturdivant described the present form of the position as “authoritarian.”

As introduced, the change would also allow the council to fire the administrator if he or she does not become a town resident within six months of being hired.

Councilwoman Kathy Horgan has so far opposed the change, saying the residency restriction would limit the pool of potential job applicants. Councilwoman Kate Triggiano has questioned the need for the change, noting that all hires are reviewed by the governing body.

Meantime, as part of an ongoing review of municipal government that got underway in earnest last month, the commission has been interviewing local government specialists. And if there’s one consistent message so far, it’s that things work best when elected officials don’t interfere with day-to-day government operations.

Earlier this week, during its semimonthly meeting conducted via Zoom, the commission interviewed Stanley Sickels, who served as borough administrator from 1995 to 2017; and interim Business Administrator Darren McConnell, who added the job to his duties as police chief when Ziad Shehady resigned last May after three years.

Shehady was also scheduled to appear, but did not because of a scheduling conflict, said Chairwoman Nancy Facey-Blackwood. He is “likely”  to appear at a future meeting, she said.

Sickels, a retiree now living in Georgia, noted a shift toward greater “political” interference in the operations of borough hall in the last third of his career.

“It seems it got more political in the last 10 years,” said Sickels. “It was more about what’s best for the town and working together in the early days.

“After a while, we started getting full-time council people, for lack of a better term,” he said. “They were more involved in the day-to-day than they really should have been. Department heads were told to do things that I didn’t know about.”

McConnell, a borough employee for 33 years, praised the utility of council committee meetings as “beneficial” in terms of getting things done and providing “opportunities to have in-depth conversations with the council people” who serve as department liaisons.

“The downside of that is if those committees go beyond their scope and their role,” he said. “They can be a detriment to the department head and to the operation of the borough.”

He said he had not seen that happen in his nine months as administrator, “but over the course of my career, I’ve seen where it’s happened in certain departments. I think it’s largely dependent on who those individuals are and how they conduct themselves, not just the elected officials but also the department heads and the administrator.”

That echoed testimony last month by Joe Hartnett, who co-authored a scathing review of borough operations in 2017 that recommended the review of Red Bank’s 1908 charter.

“The most important thing that I recommend is that there be a CEO,” Hartnett, who briefly served as interim administrator in 2018, told the commission last month.

The commission also heard last month from Ed Sasdelli, a local government specialist from the New Jersey Department of Community Affairs, who laid out the 12 forms of municipal government used by the state’s 565 municipalities.

Under the most widely used form, the borough form, the hiring of an administrator is optional.

The five-member commission, which includes two former council members, may recommend a change to a new form of government when it completes its report in August. Voters would have to approve a change by referendum, with one widely expected in November.

The commission’s next meeting is scheduled for Tuesday, February 15.

The council meets at 6:30 p.m. Wednesday, beginning with a workshop session followed by a regular voting session. Access and participation details can be found here.