‘Circus Summer,’ above, is one of two paintings by Red Bank artist Eileen Kennedy that’s slated to go to the moon this summer. 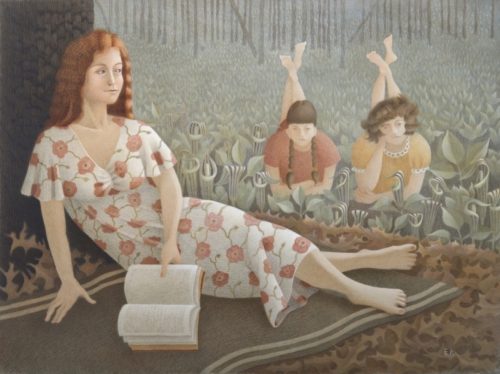 Kennedy’s egg-tempera works ‘Circus Summer’ and ‘Wetlands,’ have been selected for inclusion in the Lunar Codex, a project that is sending art from all over the globe to the moon.

During the lockdown of 2020, Kennedy’s work was included in ‘The New Pre-Raphaelites,’ an exhibition curated by Philadelphia-based curator and artist, Jessica Libor. The works from that show will be compiled into a digital catalog and placed in a time capsule along with other examples of contemporary visual art, books, stories, films and music.

The Lunar Codex will be delivered in three missions bound for the moon in summer 2022. Kennedy’s work will be part of the “Polaris Collection” on an Astrobotic Griffin/NASA VIPER mission destined to land in the vicinity of the Lunar South Pole. This project is the first to launch the work of women artists to the moon.

“I had been following this project online for some time,” Kennedy said in an announcement. “I never dreamed that my work would be included.”

A graduate of Pratt Institute, Kennedy also studied at the Hartford Art School and the Art Students’ League of New York. She has exhibited throughout the mid-Atlantic region and is a recipient of a 2022 Artist Fellowship from the NJ State Council on the Arts/Department of State.

Posted on March 14, 2022 at 4:20 pm, filed under All Good, Art, RED BANK and tagged Art, eileen kennedy, moon, red bank, time capsule. Bookmark the permalink. Follow any comments here with the RSS feed for this post. Trackbacks are closed, but you can post a comment. Email this story.
PREVIOUS: RED BANK: FIRE RESCUE VESSEL NEARLY READY NEXT: RED BANK: ‘NONPARTISAN’ IN THE SPOTLIGHT
redbankgreen.com