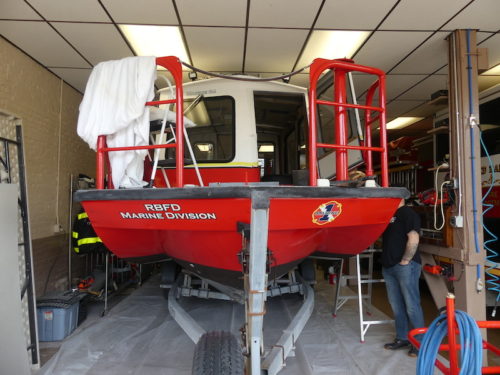 Red Bank’s volunteer fire department is nearing completion on an overhaul of a multi-use boat it recently obtained for free. But it needs a hand from the public. 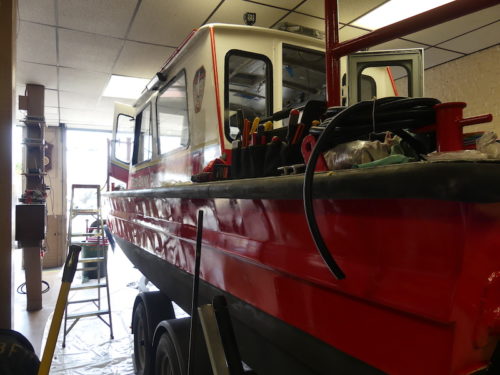 The new Marine 1 getting an overhaul at Union Hose. Below, the boat it will replace in its berth at Marine Park. (Photos by John T. Ward. Click to enlarge.)

Like the 21-foot vessel it replaces, the aluminum 1991 SeaArk was obtained for free as surplus through the New Jersey Forestry Service, Chief Nick Ferraro said last week.

Formerly owned by the Leesburg Fire Department in Cumberland County, it had apparently been sitting in a field for years, providing a home for raccoons. But it’s in excellent shape, Ferraro said.

Dubbed Marine 1, the boat will be used to rescue boaters and fight boat and marina fires in Red Bank and in other towns along the Navesink and Shrewsbury rivers and beyond, as part of the Monmouth County Marine Task Force (in which it will be known as Marine 64).

Two boat fires in recent months – one at the Molly Pitcher Hotel marina, the other at Irwin Marine – hinted at the utility of the vessel. The latter blaze, in January, forced firefighters to work right up against a burning yacht from an ice-encrusted dock, in a strong, onshore wind.

Fighting the same fire, the new vessel “would have done all the work,” said Ferraro.

Like the used rescue truck the department bought and refurbished last year, the boat’s cabin provides an enclosed space in which divers can change into and out of gear in cold weather. It also has a diving platform, another advantage over the current vessel.

Working at the Union Hose firehouse on Shrewsbury Avenue, volunteers have scraped and repainted the hull, and last week were preparing to install electrical controls and a water cannon.

But the vessel still needs an inboard-outboard motor, and the department is “on the cusp of missing our window” to get it on the water for the upcoming boating season, Ferraro said. If the order is not placed soon, the vendor may not be able to get to it once the busy season kicks in, he said.

While the department is hoping for support from the borough budget, the fire department is also seeking donations for the project. See the GoFundMe page here.