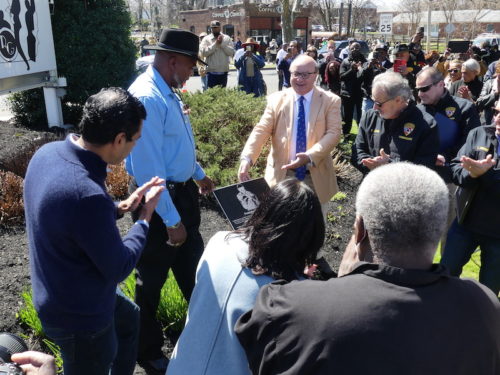 Freddie Boynton, in blue shirt, looks on as Mayor Pasquale Menna unveils a plaque honoring him at Johnny Jazz Park. (Photo above by John T. Ward. Click to enlarge.) 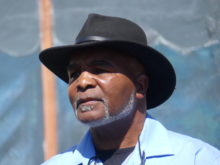 Instead, he got into a truck, and found ways to fight for his neighbors on Red Bank’s West Side.

Video of a 10-round junior middleweight fight between Freddie Boynton and Calvin Porter in 1983. Below, the plaque. (Photo by John T. Ward. Click to enlarge.) 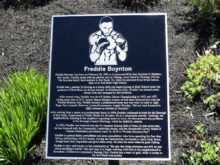 As a longtime Red Bank public works employee, Boynton was known to shovel snow for elderly residents and take care of other problems on his own time, Mayor Pasquale Menna told a gathering of more than 100 Boynton admirers at Johnny Jazz Park Saturday.

The occasion: the unveiling of a plaque honoring Boynton for his achievements in the boxing ring, as well as his advocacy on behalf of borough residents – and particularly the African-American community.

Boynton, now 67 years old, grew up on the West Side, attending River Street School and Red Bank High School. From his late mother, Billy Jean Boynton, he learned “to never say no,” said Menna. “The man never says ‘no’ to helping anybody.”

In high school, a teacher, Herb Reed, steered Boynton toward boxing, and would drive him daily to a workout at the Middletown PAL.

Over an 11-year career, Boynton compiled a 14-14-2 record as a welterweight. He was inducted into the New Jersey Amateur Olympic Boxing Hall of Fame in 2019.

After his boxing career ended in 1984, Boynton maintained the borough’s streets as a public works employee of three decades.

Today, Boynton still is a daily presence, trawling the streets in his gleaming pickup truck when not cooling his heels at the Celestial Lodge on Drs. James Parker Boulevard, where locals know they’ll find a receptive ear about problems with local government.

“I want to say what a friend we have in Freddie,” said 82-year-old Jesse Garrison, a former Red Bank Regional High School board of ed member, who sang a song in Boynton’s honor. “He will do anything for you. There’s nothing he will not do.”

Twice a month (pandemic excepted), Boynton can be found at borough council meetings, seated at the back of the room, waiting to be the last speaker during public comments.

When he gets to the mic, he can be counted on to bring up one or more issues of his unofficial constituents: a catch basin that overflows in storms. Young residents needing work as laborers. Elderly residents trying to survive the crushing weight of property taxes. Gentrification.

“He never backs down. He’s a steadfast advocate for the community,” said police chief and interim Business Administrator Darren McConnell. “We have gone toe-to-toe a few times, but it’s always been a pleasure, he’s always been a gentleman and he always really does have everyone’s best interests at heart, not just his own.”

“I’m the only man, I think, who’s stood toe-to-toe with the mayor and the chief of police of this town,” Boynton said, addressing the crowd. “And I’m going to keep doing what I’m doing for my community as long as I’ve got breath in my body.”

The park, at the corner of Drs. Parker and Shrewsbury Avenue, is named honor of the late jazz-loving butcher, Ralph ‘Johnny Jazz’ Gatta, who is also commemorated with a plaque.