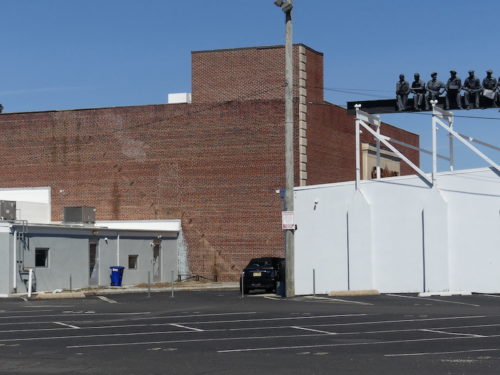 Only the posts remained after a chainlink fence that had barricaded a car in Red Bank was removed late last week.

What’s Going On Here? Here’s the latest on the dispute in which an art gallery owner had his car boxed in by a fence last week.

As reported by redbankgreen, a Mini Cooper belonging to Detour Gallery owner Kenny Schwartz was fenced in last Monday in a boundary dispute with the owner of a parking lot next door.

The lot, located between Broad and Clay streets, is under contract for sale to Denholtz Properties.

Schwartz said his car would need to “get wings” to escape the enclosed space. He filed an appeal with the zoning board, which scheduled a hearing in May.

But by Saturday, the dispute appeared on its way toward resolution. Schwartz said Denholtz CEO Steve Denholtz had offered to create an easement that would ensure him vehicular access to the rear of the gallery, which is also Schwartz’s residence.

“I have known him to be a man of his word so this should work, I believe,” Schwartz said.