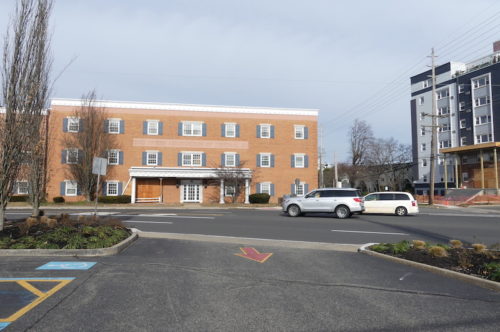 Two years after obtaining approval for a massive residential real estate project in Red Bank, Saxum Real Estate is heading back to the borough planning board in search of a booster.

The Summit-based development company won board approval in December, 2019 to build 210 apartments at 176 Riverside Avenue, the 2.7-acre site of the former Visiting Nurse Association headquarters.

Construction, however, has yet to begin.

In an application scheduled to be heard by the board Monday, Saxum is asking to amend the site plan to add two more apartments to the total. According to the meeting agenda, the company is also seeking:

• modifications to the bedroom counts of the units

• and “other modifications to design and layout of the proposed development.”

Details on the bedroom count request were not immediately available Friday morning.

According to a letter filed with the borough planning office by Saxum attorney Brian Harvey, the project would now incorporate an additional lot, which reduces the density of the project from 88 units per acre to 77.5.

That lot is shown in Monmouth County records as owned by the company that owns the Colony House apartments on the opposite side of Bodman Place. According to Harvey’s letter, 60 of the Saxum project’s parking spaces would be “reserved for a residential apartment community located along Bodman Place.”

The project would still provide 32 units for low- and moderate-income residents, as previously approved, “making this the largest inclusionary housing project in Red Bank,” Harvey wrote.

Last October, the planning board rejected the firm’s request for an “Area in Need of Redevelopment” designation under New Jersey law.

The meeting is to be in-person in the council chamber at borough hall, 90 Monmouth Street, at 7 p.m. Here’s the agenda.