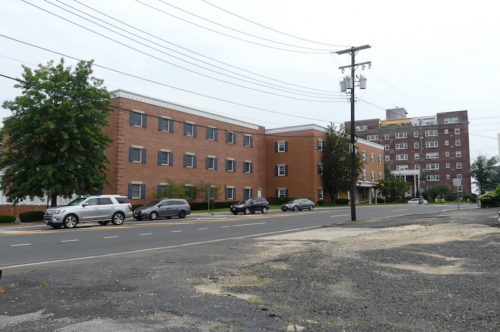 At a meeting that lasted just 12 minutes, the borough planning board unanimously rejected a proposal that objectors feared would lead to massive tax breaks for the developer. 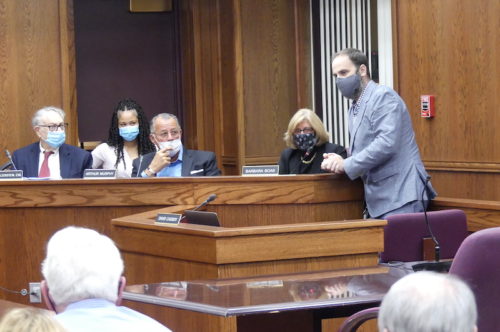 Standing to use a colleague’s microphone, board member David Cassidy spoke against the redesignation. (Photo by John T. Ward. Click to enlarge.)

At issue was a possible reclassification of property to an “area in need of redevelopment” under New Jersey law for a cluster of sites near the Route 35 Cooper’s Bridge.

Foremost in size was Saxum-owned 176 Riverside Avenue, the three-acre former Visiting Nurse Association headquarters. Saxum won approval in December, 2019 from the same board to build 210 apartments there but has yet to begin site work.

No one from Saxum has spoken publicly about the rationale for the request. But the firm needed the zone change “in order to make the project economically viable” in the face of increased construction costs, borough redevelopment consultant Ken DeRoberts said in June.

At the request of the borough council, two vacant gas stations were also included in the so-called “study area:” a former Exxon on southbound Route 35, and a former Raceway at Riverside and Bridge Avenue.

Though a study by engineering consultants CME Associates found that the three sites qualified as an “area in need of redevelopment” in part because of their state of “deterioration,” board members disagreed as to Saxum.

“I am not persuaded, and can’t in good conscience go along with the report,” said Mayor Pasquale Menna.

“Would I like to see the gas stations properly developed in some smart way? Yes,” said board Chairman Dan Mancuso.

But Saxum, he said, “has an approval. They can build the building. They came here and asked us for approval of a project that they designed, and we approved. Anything else that’s going on there is on them. It’s certainly not on the planning board, the council or the backs of the residents.”

Alluding to the report’s discussion of a leaking roof and mold, member Barbara Boas said that “any injury to the VNA building was self-inflicted, and I don’t think it’s the borough’s responsibility to heal those wounds.”

Member David Cassidy, a volunteer firefighter, said he was on-scene after a vehicle crashed into the building last December, the second such accident in three years.

“It’s not a building in duress,” he said. “This is disrepair.”

“I don’t think it is in good faith to not repair that to a safe condition,” he added. “The residents of Bodman Place deserve better.”

Opponents of the change nearly filled the council chamber for the board session. They applauded each “no” vote.

Concerned that a redesignation would lead to a negotiated Payment in Lieu of Taxes deal that shortchanged local schools, they had mounted a campaign that led to a proliferation of “No PILOT” lawn signs throughout the borough.