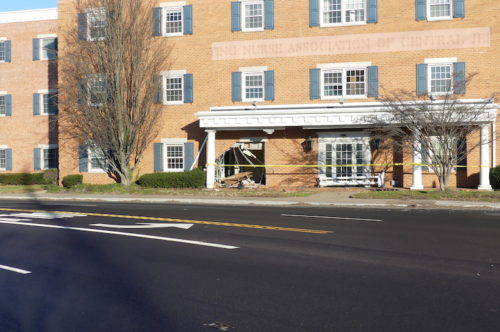 No one was injured when a car plowed into the vacant former VNA headquarters in Red Bank early Sunday morning.

The vehicle struck the same spot hit in a 2017 crash, which neighbors cited in raising safety concerns about a massive development plan for the location. 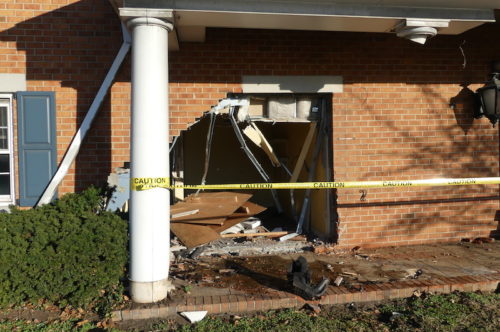 A closer look at the aftermath of Sunday’s accident. Below, firefighters on the scene during the 2017 crash. (Photos by John T. Ward and Susan Ericson. Click to enlarge) According to police Chief Darren McConnell, the latest accident occurred at 2:11 a.m., when a four-door hatchback driven by Robert Little IV, 26, of Highlands, jumped the curb and smashed into the building at 176 Riverside Avenue.

Little was arrested and charged with driving while intoxicated and “multiple moving violations,” McConnell said.

The borough’s volunteer fire department also responded, and found the damage to the building did not appear to be a safety issue, he said.

The structure is located on a bend in the roadway, which doubles as a stretch of Route 35.

The crash was reminiscent of a 2017 accident involving former professional baseball player John W. Valentin, who struck the same area of the building, which was also vacant at that time. He and a passenger were trapped in their vehicle for about 20 minutes before being rescued by emergency personnel.

The property is now owned by Saxum Real Estate, which has borough approval to build 210 apartments on the site.

During the 2019 planning board hearings, local residents cited the crash as they raised concerns about a pedestrian plaza that was proposed for the Riverside Avenue side of the project. Under the approved plan, the plaza would be created on the Bodman Place side of the corner.