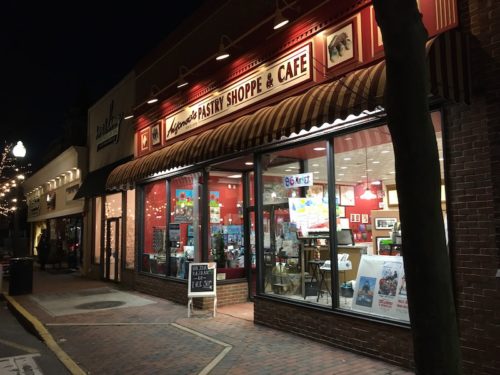 Red Banker Mike Quon, below, is among the visual artists and craftsmakers selling their wares in a pop-up bazaar in the former Alfonso’s Bakery storefront on Broad Street. (Photos by John T. Ward. Click to enlarge.)

The holiday season is popping in Red Bank, with a number of organizations applying the retail ‘pop-up‘ concept in coming days, not just to storefronts but also to entertainments. 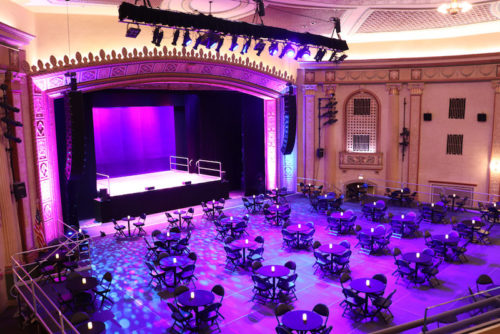 A balcony view of the Count Basie pop-up seating arrangement. (Photo by Count Basie Center for the Arts. Click to enlarge.)

• Red Bank-area artists and craftspeople have created a “holiday bazaar” pop-up shop at 86 Broad Street, in the space vacated by Alfonso’s Pastry Shoppe, which closed in June after just 17 months of operation.

The space serves as a holiday-season version of the three-year-old Red Bank Artisan Collective, which also operates a store and gallery at 43 Broad Street, said artist Mike Quon, one of numerous local makers whose creations are on display and available for purchase through December 30.

On Saturday, the bazaar plans to offer six hours of live music to shop by, from 3 to 9 p.m., said Quon.

Collective founder Debbie Eisenstein is a principal in the firm that owns the building and made it available to the vendors, Quon said.

• Also on Saturday, the Two River Theater plans to spread a little holiday joy Saturday with an event called ‘Making Spirits Bright: A Holiday Pop-up On the Plaza.”

The plaza in question is the area in front of the Bridge Avenue venue, which will be transformed into an outdoor winter wonderland between 11 a.m. and 3 p.m., with a selfie spot, crafts-in-a-bag, hot chocolate and items for sale by local artisans and crafters.

Masks are required and social distancing guidelines will be observed. The event is free, but registration is requested.

• To accommodate at least some patrons during the pandemic, the Count Basie Center for the Arts plans to revive a “pop-up” seating arrangement in its main auditorium, formerly known as the Count Basie Theatre but now called the Hackensack Meridian Health Theatre.

And you might call one of the first presentations on the stage a pop-up production.

The space will host a new, original pop-rock musical being presented by partner Phoenix Productions December 16 and 17. Written by Jersey guys Jon D’Agostino and Michael August Walton. ‘Every Wednesday Night’ tells the story of a man who finds a deeper connection to his late father, and a new sense of community, when he ventures into the world of karaoke.

The show, whose cast includes Jaclyn Spitler of Red Bank, is the first production Phoenix has mounted in the pandemic, and will serve as a fundraiser for the nonprofit Red Bank-based organization. Tables for ‘Every Wednesday Night’ are priced at $120 for two seats and $240 for four seats.

But it will also benefit the host space, Basie CEO Adam Philipson said in a press release.

“The Count Basie Center for the Arts has lost in excess of $8 million since the onset of the pandemic,” he said. “Producing these performances, as well as holding safe and socially distant onsite classes and films at Basie Center Cinemas, is crucial to our survival. But none of this is possible without safety being at the forefront of everything we do. We’re as dedicated to creating and maintaining safe environments as we are in our mission to inspire, educate and entertain through the arts.”

For the Basie, the presentation involves retrofitting the theater’s sloped floor seating area into one that’s level with the stage, a concept that’s been used sporadically in the past.

Like the newly opened Vogel space in the Basie Center complex, the “pop-up” setup in the 94-year-old venue will feature limited seating, socially distanced, and with masks required for all patrons.

The first regular performance in the pop-up stage configuration will be local artist Chris Pinnella on Saturday, December 19. Tickets go on sale Friday.

No, not Elvis: capricious fictional imps whose images are scattered throughout more than a dozen stores downtown as part of an Elf Scavenger Hunt sponsored by Red Bank RiverCenter. The idea is to spot and record the locations, with participants vying for gift cards and other prizes.