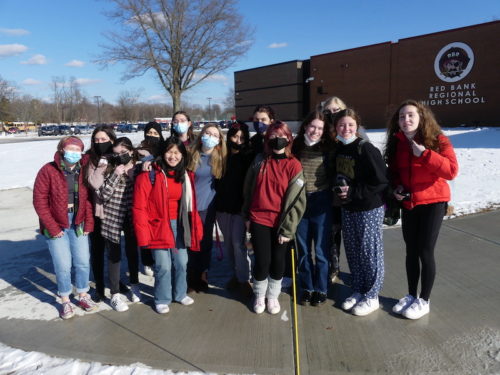 Members of the Young Feminists outside Red Bank Regional High in February. (Photo by John T. Ward. Click to enlarge.)

Frustrated by bureaucracy, representatives of a new Young Feminists group pressed the Red Bank Regional High School board of education for clarity on how to achieve club status last week night.

Young Feminists founder and president Eden Stein told the board Wednesday night that the group grew out of a January, 2021, conversation among a handful of female students “about things that matter to high school girls – mansplaining, sexual harassment, school dress codes and more.”

The group’s 50 members include two male students, said Stein, a rising senior from Red Bank. Over the past school year, the group has hosted a drive to make menstrual products more available in school; held a blood drive in conjunction with the Student Council; conducted monthly “Fireside Chats” to provide a safe space for members to express themselves; and organized “Wear Red Day,” to raise awareness of female risk of cardiovascular disease.

“Our mission is to create a better world — in school, in the Red Bank community, and beyond,” Stein said. “We think that society needs to change its sexism, racism, homophobia, transphobia, ageism, adultism, classism and ableism. We aim to help that happen, and welcome the entire school community to join.”

But the organization has been unable to win designation as a school club. Thus, it isn’t permitted to have a faculty advisor, though a staff member had agreed take on the role; couldn’t use a school bank account for fundraising – in part to pay the advisor a stipend; can’t use the school name in its own on flyers or social media; and isn’t allowed to set up a recruiting table at the extracurricular activities fair for ninth graders.

Adding to the frustration was a lack of clarity on how groups attain club status, Stein said. It took the Dreamers, advocates for the rights of Hispanic students, five years to rise from “interest group” to club status last September, while groups of young Republicans and rugby enthusiasts had been turned down, she said.

“Our ask is simple — we want all students, regardless of viewpoint, to be treated the same,” she said. “We want to know how Young Feminists can be treated like other school groups.”

Last fall, Superintendent Lou Moore allowed the organization to meet on campus and host activities. But other restrictions remained, “and no matter how long we exist with a lot of members or good work we do, may never become an official club,” Stein said.

Stein and her mother, Dayna Stein, reached out to the American Civil Liberties union for help. In a December letter to Moore, ACLU law fellow Shira Wisotsky cited the First Amendment and the federal Equal Access Act in urging the district to adopt “clear and equitable policies” that include a group-recognition process and access to school resources.

In their absence, “there is a high likelihood that members of the school community will perceive, and may in fact experience, viewpoint discrimination,” Wisotsky wote.

In response to the group’s presentation Wednesday night, board member John Venino suggested that the board’s attorney have a draft policy read for the July meeting, Dayna Stein told redbankgreen afterward.

On Thursday, Moore told redbankgreen via email that a policy regarding “full club recognition should be finalized soon and will be shared.”

In the meantime, the Young Feminists “can continue to meet and engage in the activities that they shared” at the meeting, he said.

The members “did a great job presenting,” he said. “We are also proud of what they have accomplished so far.”