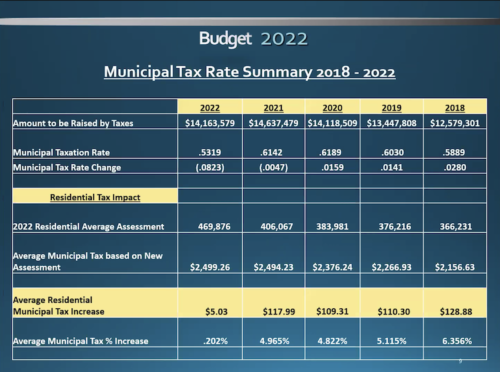 A chart used in a budget presentation last week shows a tax increase of just $5.03 for the year for the owner of a home assessed at the borough average of $469,876. (Click to enlarge.)

The owner of a typical Red Bank home would pay just $5 more in local property taxes under the 2022 budget up for adoption Wednesday night, according to Councilwoman Angela Mirandi.

On the flip side, the average residential valuation on which the tax will be applied is up 16 percent in the past year, said Mirandi, who heads the council’s finance committee.

“I think the residents are going to be taking it on the chin this year, with the big increase in residential assessments,” Mirandi said in late April.

At a recent council meeting, Mirandi said her aim in shaping the $25.2 million spending plan was to keep a lid on taxes, particularly in light of “all this economic turmoil.” She cited high fuel and food prices, stagnant incomes, falling retirement account balances and “people on fixed incomes struggling to make ends meet.”

Also on the council’s agenda:

• Authorizing $750,000 in debt issuance for the borough water utility.

• Renewing the contract with Millennium Strategies, the borough’s grant-hunting consultant.

• Reappointing Tommy Welsh as fire marshal for another four years.

• Approving grant applications to the New Jersey Department of Transportation for road projects on Harrison Avenue and at the borough train station.

• Appointments to the Historic Preservation Commission and Shade Tree Committee.

The meeting, starting at 6:30 p.m., is to be hybrid: both in-person at borough hall (90 Monmouth Street) and available via Zoom. Remote access and participation details can be found here.