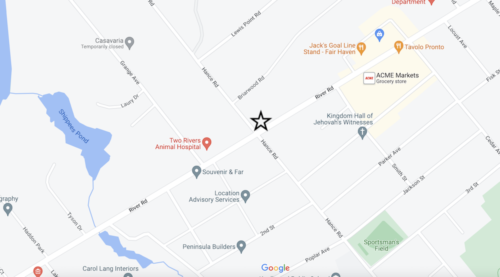 The cyclist was struck in the area of River Road and Hance Road, police said. (Google map. Click to enlarge.)

See UPDATE and CORRECTION below

A cyclist was struck by a stolen auto during a police pursuit in Fair Haven Tuesday morning, redbankgreen has learned.

Here’s a statement from FHPD:

The Fair Haven Police Department received a call at 0735 this morning reporting an attempted vehicle theft. The vehicle involved was described as a white Bentley SUV occupied by 2 males wearing face coverings, last seen on Fair Haven Rd. A vehicle matching this description was reported stolen to the Rumson Police Department earlier this morning. Subsequent reports were received reporting a suspicious vehicle matching the above description on Allen St and Church St in Fair Haven. At approximately 0745 a Fair Haven Police officer assigned to a traffic detail at River Rd and Hance Rd spotted the vehicle on River Rd and attempted to confront the driver. The vehicle then turned onto Hance Rd northbound where it struck a bicyclist and fled the area. A Fair Haven officer on patrol then located the vehicle on Lewis Ln where a pursuit was initiated after the vehicle refused to stop. The. pursuit was terminated after attempts to stop the vehicle were unsuccessful and it was last seen heading west on Harding Rd into Red Bank. The bicyclist, a Fair Haven resident, was treated at the scene by patrols and the Fair Haven First Aid Squad and subsequently refused further medical assistance. The incident remains under investigation and anyone with any information is asked to contact Fair Haven Police Detective Dwayne Reevey at 732-747-0241 x336

UPDATE: Captain Robert Townshend said the officer who attempted to confront the stolen vehicle was on foot, working traffic duty at the River Road repaving project.

“He saw the vehicle coming up to the intersection and he approached the driver” when the vehicle stopped, Townshend said. The vehicle then took off, striking the cyclist, who was tended to immediately by the officer and another who arrived in a patrol car, he said.

Police are not identifying the cyclist, an adult male, Townshend said.

The vehicle headed north on Hance to Lewis Point Road, where a police vehicle began the pursuit, he said.

Townshend said matter is under standard review. He said the department follows the New Jersey Attorney General’s policy on stolen-vehicle pursuits “to a T,” and Tuesday’s incident “certainly did match that criteria.”

“Nothing stands out to indicate an inappropriate response, but it’s under investigation,” he said.

Information on the number  of vehicles stolen in town, and the number of pursuits, was not immediately available, he said.