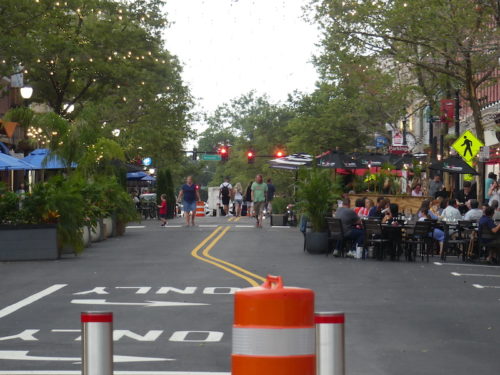 A one-month extension for Broadwalk, now scheduled to end Labor Day, is up for council discussion. (Photo by John T. Ward. Click to enlarge.)

Correction: The council workshop and regular sessions are slated for Thursday, not Wednesday as originally reported here.

For its only public sessions of August, the Red Bank council will meet virtually Thursday night.

Among the business on the workshop and regular agendas: filling the posts of borough attorney and tax assessor; extending the Broadwalk dining plaza by a month; authorizing searches for a “strategic municipal planner” and a “municipal vision planner;” and greenlighting a “porchfest” event.

On the workshop session agenda:

• Appointing a borough attorney. The council majority, led by Councilman Ed Zipprich, abruptly fired Greg Cannon from the position last month and attempted to replace him with Scott Salmon, of the Jardim, Meisner & Susser firm. But lame-duck Mayor Pasquale Menna, citing his authority to make the appointment, refused to do so.

• Appointing a tax assessor. No name was provided for the nominees to fill the post, which has been held for many years by Mitch Elias; his status was not immediately available.

• Discussion about granting an extra month of operation to Broadwalk, the dining and shopping plaza on the northernmost blocks of Broad Street.

When the council authorized the third, construction-delayed Broadwalk season last month, Councilman Michael Ballard and others in the majority on the all-Democratic council opposed letting the program continue beyond Labor Day. Downtown promotion agency Red Bank RiverCenter had sought a run through October 2.

• Authorizing requests for proposals from would-be a “strategic municipal planner” and a “municipal vision planner.” Neither is explained in the agenda.

On the regular agenda:

• A proclamation to commemorate the 150th anniversary of the Red Bank Volunteer Fire Department.

• Approval of special events, including a “porchfest” slated for Sunday, October 9. The organizer was not identified on the agenda.

According to NJIndy, porchfests feature front-porch music performances, and are held in more than 130 cities and towns in America, including Asbury Park, Princeton and Cranford.

Here are both agendas. The regular session will immediately follow the workshop, which begins at 6:30 p.m. Both will be conducted via Zoom; registration for access and participation is here. Both will also be carried live on the borough’s Facebook page, but viewers will not have the ability to comment or ask questions.

No reason for the change to virtual-only meetings was given when the agenda was posted shortly before 6 p.m. Tuesday, and announced on Twitter two hours later. But in council discussion last month about rescheduling the August 10 sessions to August 18, officials noted that the Historic Preservation Commission is scheduled to hold its monthly meeting in the council chamber at 7 p.m. Wednesday. (Here’s the HPC agenda.)