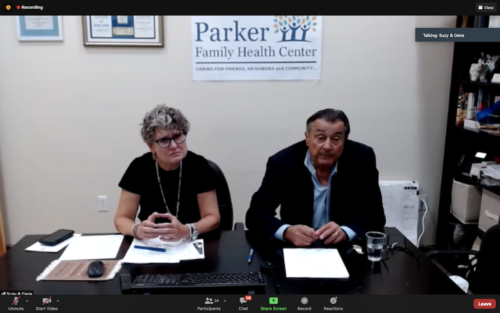 Panelists and about two dozen viewers took stock of some healthcare challenges faced by the disenfranchised during the latest entry in the library’s ‘Let’s Talk About Race‘ series. 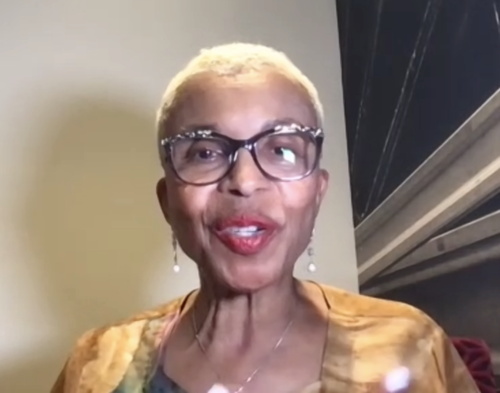 Dr. Carol Penn recounted the story of an uncle’s death in boyhood from appendicitis.(Photo from Zoom. Click to enlarge.)

The conversation, via Zoom, marked the start of the eighth year for the award-winning discussion series, “and we have never run out of subject matter,” said library adult programming coordinator Linda Hewitt.

Dr. Carol Penn, a fourth-generation Red Banker and physician, began the conversation by recounting the boyhood death of her mother’s brother, Joseph, in 1926.

Joseph, aged 9 and living with his family on East Sunset Avenue, was denied access to Riverview Hospital and other Monmouth County hospitals because his physician, African-American physician, Dr. James Parker, did not have admitting status, Penn said. The boy died of complications from appendicitis, she said.

“This was, make no mistake about it, a very segregated community” in which “medical apartheid was practiced,” said Penn. “And we are still living downstream of those policies.”

A need to improve minority access to health services drove the creation, in 2000, of the Parker Family Health Center on Shrewsbury Avenue, said founder Dr. Eugene Cheslock. Even then, he said, “Red Bank was known as a medically underserved community.”

But starting in March, 2020, the COVID-19 pandemic exposed economics-based health disparities, said Suzy Dyer, the executive director at the volunteer-staffed free clinic, which serves the uninsured.

“People stopped coming. People were afraid. People weren’t getting the healthcare they needed,” said Dyer. “And that has come out in our patient numbers.”

Last year, the clinic recorded some 1,500 unduplicated patients, who made more than 9,000 visits to the center, with many patients a lot sicker than in the past because of deferred healthcare,  Dyer said.

But if not for the clinic’s aggressive approach to obtaining and administering COVID vaccines, with help from Pilgrim Baptist Church, the toll of the pandemic in and around Red Bank would have been far worse, said Dyer. Vaccination rates for African-Americans and Hispanics in Red Bank vastly outpaced those for New Jersey overall, she said.

“The numbers speak for themselves, that coming together and creating community partnerships makes a huge difference,” she said.

Among the foremost issues that persist in minority communities is maternal and neonatal mortality, participants said.

“For many years, differences in health outcomes seemed obviously connected to financial and access issues, and in certain specific cases, that was true,” said Phyllis Kinsler, former president and CEO of Planned Parenthood of Central New Jersey.

But “you can clear for all those economic issues, and still we have enormous disparities that are attributable only to racial differences. And it took a while to recognize that, and god help us, it’s taking much longer to respond to it.

“It took a while for the obstetrician to recognize that the well-dressed professional Black woman in his office was still struggling with her health outcomes in a way that the rest of his patients weren’t,” Kinsler said.

Reverend Dianne Watson-Kendall, who has worked in nursing for 40 years, said she has seen women in crisis or with sick children get dismissived when there’s a language barrier.

“I’ve heard nurses tell the patient, ‘if you can’t speak English, I cannot help you,'” said Watson-Kendall, who speaks Spanish. When she intervened, she said, “the woman would cling to me, so glad to have someone she could communicate with about her baby.”

“Language continues to be such an obstacle,” said Dyer. So, too, is stress, which is now having profound impacts even on toddlers, exacerbating other health issues, she said.

“As a result of the pandemic,” mental health issues are now “epidemic,” Dyer said. “There aren’t enough counselors. We’ve received calls here at Parker with school nurses begging us… to lower age that we see patients from 5 to 3, because they had so many 4 and 4-year-old suffering from stress that they couldn’t handle. That is an enormous, enormous problem, and it’s throughout the country.”

The next Let’s Talk About Race discussion is slated for September 28, with a topic yet to be determined.