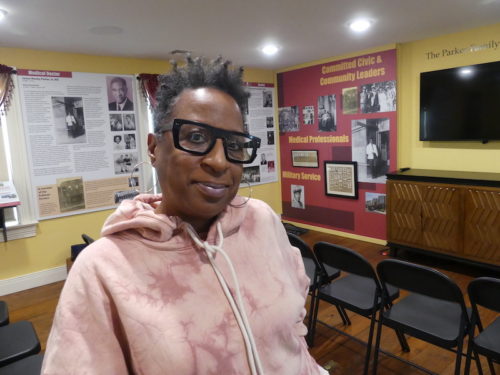 A new, permanent exhibit opening this month at the T. Thomas Fortune Cultural Center in Red Bank pays tribute to three African-American men of medicine who played vital roles in the community.

The unveiling also marks another milestone for the three-year-old center, housed in the onetime home of an influential journalist and civil rights advocate. 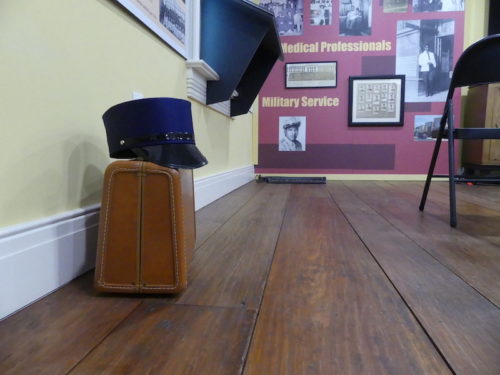 The display includes a replica of a Pullman car porter’s hat. (Photo by John T. Ward. Click to enlarge.) 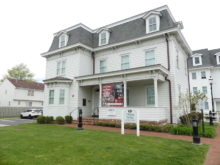 The exhibit, titled ‘Ancestral Ascension,’ occupies the walls of the newly designated Parker Family Legacy Room on the center’s second floor. It focuses on the lives of:

• His son, Dr. James W. Parker Jr., who followed his father into medicine and became the first African-American physician on staff at Riverview Medical Center in Red Bank and Monmouth Medical Center in Long Branch.

Each was known for treating patients even if they couldn’t afford to pay, Fortune Center Executive Director Gilda Rogers told redbankgreen on an advance tour last week. The Parker Family Health Center, on Shrewsbury Avenue, was launched in their honor in 2000, and Drs. James Parker Boulevard – previously West Bergen Place, and before that Beech Street –  was named for the trio a year later.

The exhibit, curated by Rogers and designed by graphic artist Stan Cain, consists of wall-mounted displays bearing photos and narrative history. There’s also a handful of artifacts, including replica of a Pullman porter’s cap. Prior to becoming a physician, Parker Sr. had worked as a Pullman porter, “and that’s important, because, back then, Pullman car porters were the social media, so to speak, of the Black press,” Rogers said.

“They rode the rails, traveled all over, and they would drop the papers off” at cities along the way, “particularly in the south, where the Black press was not even allowed,” she said.

On the rails, Parker Sr. worked with his childhood friend, A. Philip Randolph, who later organized the Brotherhood of Sleeping Car Porters, America’s first major labor union for Black workers, and organized the 1963 March on Washington. Randolph, who had relatives in Red Bank, may have had a role in Parker’s decision to settle in the borough in 1905, Rogers believes.

The displays also spotlights Margaret “Tid” Bowles Parker, the spouse of dentist James Alvin Parker and an educator who created the African-American Studies program at Brookdale Community College. That curriculum provided Rogers with her own first, deep connection to her African-American heritage and the basis for what she now sees as her “calling,” she said.

Tid Parker was also the first president of the Red Bank chapter of the National Association for the Advancement of Colored People, Rogers said.

The idea for the Parker Family Legacy Room arose during the COVID 19 pandemic, Rogers said, when she was thinking about the disproportionate adverse impacts on African-American community members, and the role that Parker Sr. played in combatting the Spanish Flu of 1918.

“We’re in this moment where, obviously, it’s bad for everyone, but its impact on Black people was greater,” she said. The roles played by the Parkers in providing healthcare “seemed to align” with the present, she said.

The Fortune center, created in a house saved from demolition by homebuilder Roger Mumford and donated to the Fortune Foundation upon completion, is fulfilling its mission to serve as a teaching center about human rights, said Rogers. T. Thomas Fortune owned and lived in the house for a decade, ending in 1911.

“It’s coming to fruition, and this room solidifies what my vision was,” she said.

The exhibit, sponsored by Monmouth Medical Center/RWJ Barnabas Health in Long Branch, where in 1955 Parker, Jr. became the first Black physician on staff, opens to the public Saturday, May 28. The center is open Saturdays and Sundays from 1 to 5 p.m. (A companion exhibit a

A private reception for about 10 members of the Parker family, as well as major donors, is scheduled for Thursday evening.