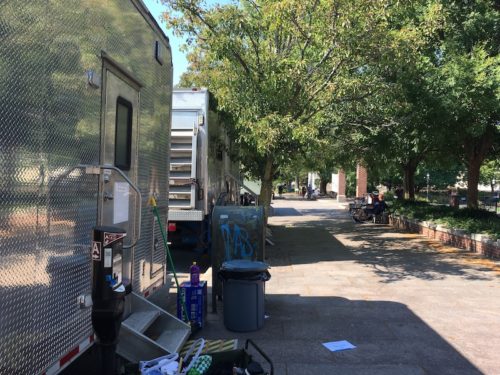 According to interim borough Administrator Darren McConnell, an indie film called “Which Brings Me to You” is using the waterfront park for “a short scene” of two actors walking together.

The park won’t be closed to the public, though the crew may redirect park visitors “for a few minutes around that immediate area of the shot,” McConnell said.

Additional shooting for the film is expected to occur in coming weeks at “various other locations [in town], most of them on private property,” McConnell said.

A romantic comedy based on a novel by Julianna Baggott and Steve Almond, the movie stars Lucy Hale as a journalist who hooks up with a photographer at a mutual friend’s wedding. That leads to 24 hours of the two “sharing stories of their most embarrassing sexual encounters, first loves and heartbreaks,” according to the Hollywood Reporter.

Posted on September 19, 2022 at 1:50 pm, filed under Featured, Festivals, Film, RED BANK, What's Going On Here? and tagged "Which Brings Me to You", Film, film production, Julianna Baggott, lucy hale, red bank nj, Steve Almond, what's going on here. Bookmark the permalink. Follow any comments here with the RSS feed for this post. Trackbacks are closed, but you can post a comment. Email this story.
PREVIOUS: RED BANK: POLICE SEEK HELP WITH IDs NEXT: RED BANK: MASTER PLAN INPUTS SLATED