Hackensack Meridian Health’s Riverview Medical Center and its holdings comprise one of three areas of town that will get special focus in the Master Plan. (Google Map from Monmouth County property records. Click green circles for site details.)

Red Bank residents will have two opportunities to weigh in on the borough’s ongoing Master Plan update next month.

Among the topics: the future of three discrete sections of town, including the area around the sprawling Riverview Medical Center. 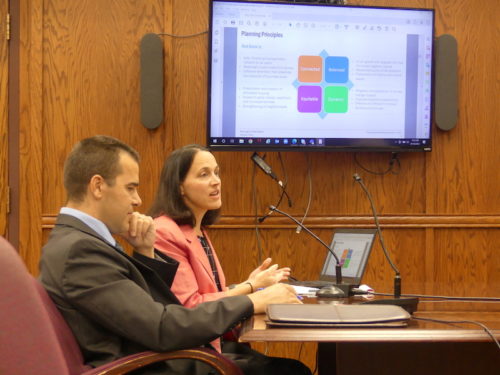 Susan Favate and Peter Van den Kooy of BFJ Planning updated the board on the Master Plan rewrite. (Photo by John T. Ward. Click to enlarge.)

The public input sessions were announced as the planning board heard an update on the document rewrite Monday night from two representatives of New York City-based BFJ Planning.

Since January, the firm has been managing the first full update of the of polestar zoning document in 26 years under a $150,000 contract.

Over the course of an hour, the board heard updates on the work, which is expected to be completed in December or January.

After months of online public input solicitation and discussion with residents, elected officials and students, the project is “now into the strategies and recommendations phase,” said BFJ principal Susan Favate.

The overall plan will touch on dozens of issues, from affordable housing to disruptive train horns, bike paths and waterfront access, she said.

For example, the borough is “starting to see some development pressure, particularly along Monmouth Street,” she said.

To address that concern, the council might consider shrinking the area in need of rehabilitation it designated in 2017 for much of the area north of Monmouth Street and west of Maple Avenue, she said.

Because the hospital is a major employer and economic engine, “we want to support them, but we also want them to recognize that they can’t just do whatever they want to do,” Favate said.

Of particular interest to board members were three “small area plans,” which Favate described as “subsets of the Master Plan” that “need a little bit more attention.”

Those sections of the document, she said, will focus on how the borough should plan for development in the areas of the hospital, on East Front Street; around the northern “gateway” into town at the Route 35 Cooper’s Bridge; and the former landfill and incinerator alongside the Swimming River at the westerly end of Sunset Avenue.

“The ultimate goal will be coming up with concrete recommendations” for the three, Favate said. In addition, the process could yield a “template” for dealing with other areas of town, she said.

Board members Barbara Boas, who pressed for the update last month, and Chairman Dan Mancuso praised the small-area approach.

“Zeroing in on those three areas is wonderful, and you’ve chosen three really good ones,” Boas said. “Those three have been discussed, and disgusting, for years,” she added.

Mancuso noted that the Sunset Avenue dump has long been envisioned as future parkland, and undergone years of environmental remediation, which continues. The plan will enable that effort to “pay off,” he said.

“Ten acres. You don’t think about it being 10 acres when you drop your cardboard off” at the adjoining recycling center,” he said. “It’s a huge piece of property, and a great opportunity to serve the whole town and, even more importantly, to get open space.”

Public presentations of the work-in-progress will be held Thursday, October 13, at the Red Bank Middle School, and Tuesday, October 24, at Pilgrim Baptist Church; both will begin at 6:30 p.m.

Favate said the presentations would not differ, and residents were welcome to attend either or both.

A public hearing would also be held in advance of the board’s vote to adopt or reject the plan, she said.