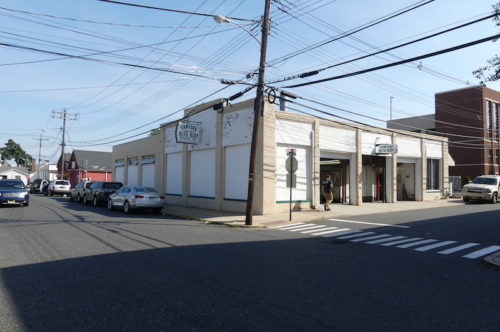 The home of Sanford Auto Body, at the corner of West and Wall streets, will be razed to create parking for the nearby Red Bank Corporate Plaza, the sellers say. (Photo by John T. Ward. Click to enlarge.)

After almost 80 years banging out dents and straightening frames, a Red Bank auto body shop is headed to the scrap heap. 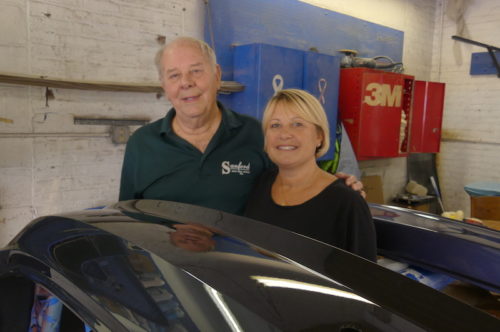 Jim Sanford and a daughter Stephanie Sanford are the third-and fourth-generation members of their family to work in the shop. (Photo by John T. Ward. Click to enlarge.)

Sanford Auto Body, at the corner of West and Wall streets, plans to shut its doors October 31, said owner Jim Sanford, and Oceanport resident who runs the business with his daughter, Stephanie Sanford.

Jim’s grandfather, Ralph Hornsberger, founded the business a block away, on Monmouth Street, in 1941, just across the street from where he also had a Sinclair gas station.

“People couldn’t buy cars because of the war, and so they were getting their cars repaired more after they had accidents,” said Jim, who will celebrate his 77th birthday later this month.

The business moved from the corner of Pearl and Monmouth streets to West Front Street in 1958, and two decades later to its present site — the onetime home of the Oh Boy Bakery, which had a small fleet of electric delivery trucks, and then the Jack Arnold heating oil service, said Jim.

Along the way, the business passed to Jim’s father, John, and a partner, George Lussier, who retired in 1988.

Stephanie Sanford, who’s run the front office for the past 18 years, told redbankgreen she and a longtime employee, Scott Sarpolos, had considered keeping the business going. But as long as it was open, her father would continue showing up, and “he needs to take it easy” now, she said.

Her father said that trends in the industry are not favorable to independent shops, as auto insurers increasingly put body shops under contract and then squeeze them to keep a lid on costs.

In his time, he’s seen many repeat customers as their families grew and children got into accidents with their own vehicles, he said.

The Sanfords are in contract to sell the property to PRC Group, owner of Corporate Plaza, the red-brick office building that dominates the block, which is also bound by Maple Avenue and West Front Street.

A November closing on the deal is expected, after which PRC intends to raze the building and use the site for parking, said Stephanie.

An official at PRC did not immediately respond to a redbankgreen request for confirmation.