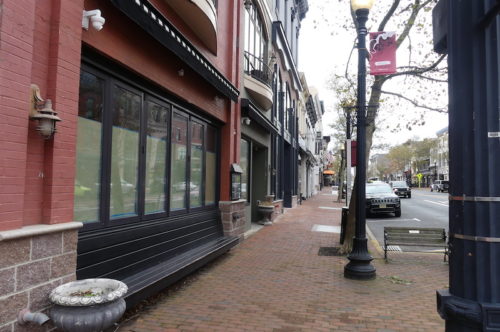 Restaurateur Jack Manousos and partner Jason Zoracki, of Little Silver, who co-own Proving Ground Waterfront Dining in Highlands and other eateries, needed planning board approval for changes to their latest acquisition: 3-5 Broad, the former home of the Belmonte, and before that, Red restaurant and nightclub.

The property consists of two original structures: a two-story building at 3 Broad, and a three-story at 5 Broad. Manousos and Zoracki bought the property for $1.9 million in April, at the same time they acquired the liquor license for an undisclosed price.

They propose creating a 75-seat rooftop dining area atop the two-story portion, while retaining the existing operations on the first and second stories.

The third floor of 5 Broad, previously used for office space, would accommodate a staircase, an elevator and service station, but no dining tables, project architect Jason Vico testified.

The expansion plan would create a need for 33 additional parking spaces, none of which are provided, Vico said.

Applicant’s attorney Rick Brodsky noted that the property is just steps away from a valet parking drop-off and pick-up station on Broad Street.

Board Chairman Dan Mancuso, however, was not sold on the changes.

“I hate rooftop dining,” Mancuso said, without elaboration, “and I have a real issue with the increased parking demand.”

At the same time, Mancuso said, “I’d love to see this restaurant working again. I just think you’re shoving too much in here.”

“I love rooftop dining,” said board member David Cassidy. “I agree we do have some issues with parking, but I’ll make a motion to approve.”

Afterward, Manousos told redbankgreen has hasn’t yet decided on a name for the restaurant, which he hopes to open in the spring or summer of 2020.