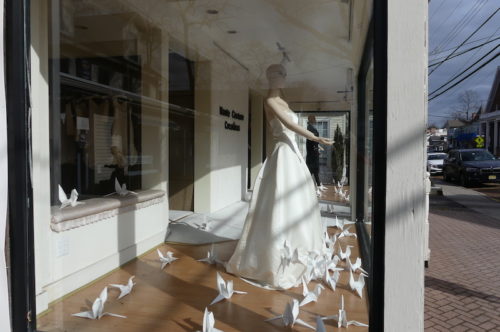 Luminously elegant in her strapless white gown, she swans through a flock of origami doves behind full-length windows in the heart of Fair Haven’s quaint business district.

For more than a decade, that mannequin and another on display at Haute Couture Creations have been something of an enigma for passersby: their outfits never seem to change. But thanks to a Facebook thread, only recently have locals collectively realized something even odder: the boutique itself is never open for business. 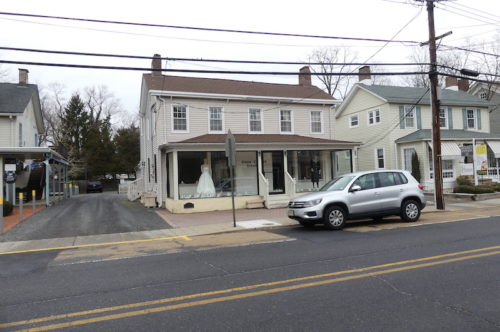 The shop debuted in 2006, though it seems never to have opened. (Photo by John T. Ward. Click to enlarge.)

Since the River Road shop appeared 13 years ago, no employees or customers have ever been seen coming or going, a handful of surrounding merchants told redbankgreen last week.

The display, which also features a mannequin clad in a long black coat and leggings, “has never changed,” says Karen Rumage, who bought River Road Books, a few doors away, in 2006, the same year that the dress shop “opened,” so to speak.

“No dresses go in and no dresses come out,” said the manager of another shop, who asked not to be identified because she wishes to “be a good neighbor.”

There used to be lights on upstairs sometimes in what was believed to be a second-floor apartment, but she hasn’t noticed any lights in years, she said.

Mail often accumulates “until it’s all soggy,” and then vanishes, said a six-year employee at another store, who asked not to be named. She said the mystery of Haute Couture is an enduring source of intrigue among her customers.

Even an employee at borough hall hadn’t realized no commerce took place at the shop until told by redbankgreen.

“That would explain it,” she said. “Every time I go by I think, ‘that dress in the window never changes – why don’t they at least change it for the seasons?'”

Based on interviews and comments on the restricted-access Fair Haven Moms and Dads Facebook page, it’s clear that many passersby long harbored curiosity about Haute Couture. Last week, when one member asked “what’s the story with that place?” a thread bloomed, with others saying they, too, had always wondered the same thing.

One member dubbed it #Hautemystery. Another joked she might pretend to need a wedding dress to try to solve it. Still another reached out to redbankgreen to try to find an explanation.

“Haute Couture Creations is a lady’s clothing boutique,” reads an undated listing on a directory site. “We are specialized in bridal gowns, evening gowns and formalwear.”

So how would customers buy anything? The shop’s front door was locked Friday, without any indication of business hours, and the phone number was out of service. The generically branded boutique has no website, and a bare-bones Facebook page contains no posts by its administrator.

New Jersey government records reveal that someone named Yi Lau incorporated Haute Couture Creations as a “family clothing” business at 771 River Road in 2006. Someone named Kei Lau had purchased the building seven years earlier, for $89,500, according to Monmouth County deeds.

Tax bills for the property, currently assessed at $508,000, go to Kei Lau in South Dartmouth, Massachusetts. Taxes have been prepaid through the first half of 2020, according to borough records.

Lau confirmed that he owned the property, but said he didn’t understand why a reporter would be asking about it.

“It’s just a building that’s sitting there,” he said.

But why has the shop never opened? we asked. Just as Lau began to speak, the connection went bad. Repeated attempts to reach him again were unsuccessful and he did not respond to a voice message  over the weekend.

Bookstore owner Rumage said she sees the dormant shop as a missed opportunity for Fair Haven.

“It would be nice if it was being used somehow, to add to the vitality of the business district,” she said.