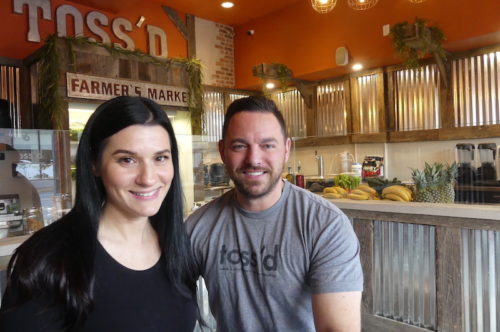 What’s the secret to surviving as owners in Red Bank’s crowded dining market?

In this edition of redbankgreen‘s Retail Churn, a pair of accidental restaurateurs share some insights as they prepare to launch their third concurrent venture in the heart of downtown. 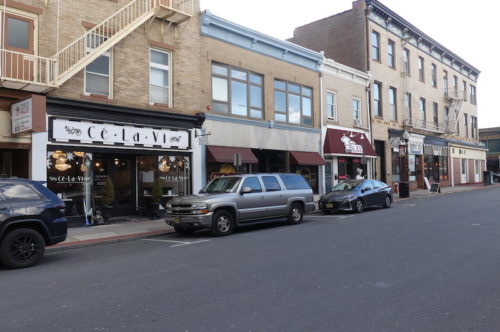 With the formal opening next week of Toss’d, Erica Lieberman and Nick Napoletano’s mini empire now consists of three restaurants within steps of each other at the eastern end of Monmouth Street, near Broad Street.

The other two are Ce La Vi and Mr. Pizza Slice. Toss’d, a salad shop, takes over the space at 6 Monmouth, which was previously home to their first venture, Whipped Bites, which evolved into Ce La Vi, the creperie that opened last April.

If that’s a little hard to follow, well, that’s kind of the point. To Lieberman and Napoletano, who are also parents of two young kids, adaptation is critical to survival.

First and foremost, says Napoletano, you have to offer something distinctive.

Longtime redbankgreen readers know the couple’s story, because we’ve chronicled every step in the evolutionary process. But the capsule version goes like this:

Spring 2013: Lieberman, a finance industry worker by day, expands her sideline cupcake business by renting a display case, on weekends, inside La Patisweet, at 6 Monmouth.

September 2013: Lieberman and boyfriend Napoletano take over the lease and rebrand the business as Whipped, A Café and Dessert Bar.

2014: Fending off competition from a flurry of new cupcake shops, they dial up the emphasis on crepes, shifting from sweet to savory, offering menus for breakfast, lunch and dinner and renaming the business Whipped Creperie.

January 2016: On a “slightly emotional buy” aimed at preserving a place Napoletano loved as a kid, the couple go in with fellow downtown restaurateur Tom Cappello to buy Mr. Pizza Slice from Steve Napolitani, who retires after 44 years behind the counter.

March 2016: After buying out Cappello’s stake and giving the business an overhaul, they reopen Mr. Pizza Slice with an expanded menu.

April 2019: After closing Whipped specifically to give it a makeover and build a full-service kitchen, Lieberman and Napoletano open Ce La Vi at 16 Monmouth (and come through a threatened trademark lawsuit unscratched.)

Now, bound by a lease to the space used by Whipped, Lieberman says she and Napoletano decided to pursue her longtime dream of opening a restaurant focused on farm-to-table salads. Hence: Toss’d.

“I think we always do things a little differently” to stand out, says Lieberman, surrounded by decor evincing the interior of a barn.

The shop, which will initially stay open as long as customers come in before it settles on a regular closing time, will offer its greens and other veggies in bowls or wraps, with locally sourced ingredients.

Though there’s a Saladworks shop on Broad Street and other places with salads on the menus, “we felt this didn’t exist downtown,” says Lieberman. And she says customers at their other restaurants have been asking for the option.

Also on the Toss’d menu are smoothies and cannabidiol (CBD)-infused items, with delivery and catering available. The online menu is expected to be posted shortly, the couple said.

• Three years after it opened, the Taylor Sam’s sandwich shop at 20 Broad Street has closed.

A January 2 post on the eatery’s Facebook page said the owners have “sold” their Red Bank location, though there was no immediate indication of who the buyer was or plans for a new business.