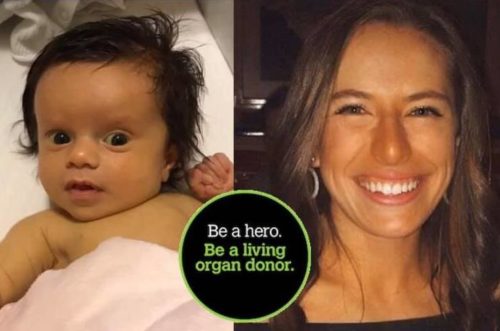 [UPDATE, February 6: Edie Rose O’Neill continues improve in Philadelphia hospital, grandfather Ed O’Neill tells redbankgreen. Organ donor Becky O’Neill has been released, he says.] [UPDATE, February 3: “Edie & Becky have safely made it through their surgeries and are both resting in hospitals across the street from one another,” Bridget O’Neill wrote on Facebook Friday night.]

A Red Bank couple hope they have found “the perfect, needle-in-a-haystack” organ donor they’ve been seeking for their ailing infant daughter.

And the donor is a member of the family.

Three-month-old Edie Rose O’Neill, the only child of Bridget and Justin O’Neill, and Becky O’Neill were scheduled to undergo transplant surgery in Philadelphia Friday morning, according to a Facebook post by Bridget: 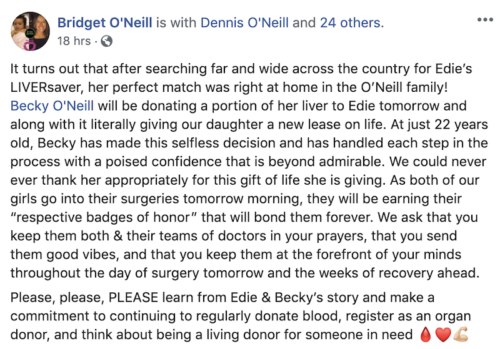 A portion of Becky’s liver will be transplanted to the infant.

Edie has been in intensive care at Children’s Hospital of Philadelphia since January 11, following a rapid deterioration of her health due to an undiagnosed liver ailment, her mother told redbankgreen January 21.

While Edie was on a deceased-donor list, medical professionals and the O’Neill family also conducted a search for a living donor that drew hundreds of responses, which were culled for potential matches.

Because she weighs only 8 pounds, Edie’s ideal match was said to be someone between the ages of 21 and 30, with a blood type either A or O (positive or negative) and weighing 100 pounds or less. More than 100 potential donors came forward.

Becky, who is Bridget’s youngest cousin on her father’s side of the family, is 22 years old. According to her Facebook page, she graduated from Colgate University in May and lives in Long Branch.

“Becky has made this selfless decision and has handled each step in the process with a poised confidence that is beyond admirable,” Bridget wrote on Facebook in announcing the match. “We could never ever thank her appropriately for this gift of life she is giving. As both of our girls go into their surgeries tomorrow morning, they will be earning their ‘respective badges of honor’ that will bond them forever.”