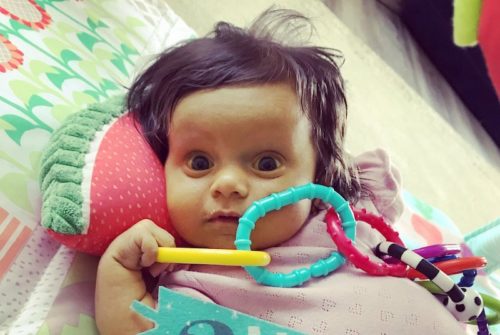 Edie Rose O’Neill has been in intensive care in Philadelphia for the past 10 days. (Click photo to enlarge.)

A Red Bank couple is desperate to find “the perfect, needle-in-a-haystack” organ donor for their ailing infant daughter.

Edie Rose O’Neill, the three-month-old only child of Bridget and Justin O’Neill, was suffering from jaundice on January 11 when her health deteriorated rapidly, her mother told radio station New Jersey 101.5 last Friday.

The baby was rushed to Jersey Shore Medical Center in Neptune, and then airlifted to Children’s Hospital of Philadelphia, where she remains in the intensive care unit.

The infant’s liver isn’t working, though doctors don’t know why, even after a battery of examinations, including genetic testing. But they know she needs a liver, said Bridget.

Edie’s on a deceased-donor list in the event that one becomes available. Meantime, along with medical professionals, the O’Neill family are hoping to find a a living donor – someone who both matches specific criteria and is willing to give up a section of their liver.

Because she weighs only 8 pounds, Edie’s ideal match is someone between the ages of 21 and 30, with a blood type either A or O (positive or negative) and weighing 100 pounds or less.

As a result of the radio interview and a push on social media, the O’Neills have heard from about 600 respondents, of whom four are currently being screened as potential donors, Bridget said. But more candidates are being sought in case those four are unable to donate, she said.

People who wish to be considered as potential donors are asked to email edietheextraordinary@gmail.com.

The O’Neills reside on Herbert Street, where Bridget grew up. Edie is the granddaughter of Kristine Rovell, a former nurse who works as a unit director at Riverview Medical Center in Red Bank, and Ed O’Neill, a partner in borough-based S.O.M.E. Architects.

While keeping a round-the-clock hospital vigil, Bridget said she and Justin are “doing as well as we can” under the circumstances. “We have a very strong community around us.”