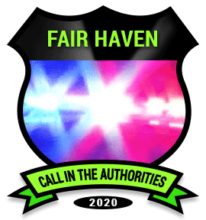 Crime and arrest reports, unedited, as provided by the Fair Haven Police Department for the month of January, 2020. For additional information, please scroll to the bottom of this post.

1/2/20 Kristen A Wimmer 20, of Little Silver was arrested by S.O.  Perkins for possession of CDS.  Mrs. Wimmer was processed and released with a court date.

1/7/20 Kristina Hunt 38, of Red Bank was arrested by Ptl. Patton for assault.  Mrs. Hunt was charged with simple assault and false imprisonment, she was processed and released with a court date.

1/10/20 James Herro 61, of Red Bank was arrested for DWI by Sgt. Schneider.  Mr. Herro received summonses for maintenance of lamps, DWI, Failure to produce a driver’s license, reckless driving and failure to produce insurance.  Mr. Herro was processed and released with a court date.

1/30/20 Sgt. Schneider took a report from several residents on the east end of town for their vehicles being burglarized.  No proceeds were taken from the vehicles.  Report passed on to Det. Reevey.

An arrest is not a finding of guilt: that’s something for a court to decide. redbankgreen publishes this information in continuation of a great American newspaper tradition because we believe it has community value.
If there is a factual error in this post, please let us know at redbankgreen@redbankgreen.com. But if this post is in itself accurate, please do not plead your case to us. Again, that’s for the court to decide.
If the charges against you are dismissed or you are found not guilty, please send us a copy of the case disposition report, obtainable from the municipal court clerk, and we will update the post to include that information.
redbankgreen does not under any circumstances remove arrest reports or other posts from its archive.
Posted on February 28, 2020 at 1:16 pm, filed under Crime, FAIR HAVEN, Featured, Law & Justice, Security, Taxes and tagged arrest, contempt, Crime, dwi, Fair Haven, fraud, mischief, nj, police, theft, vandalism, warrant, wine. Bookmark the permalink. Follow any comments here with the RSS feed for this post. Trackbacks are closed, but you can post a comment. Email this story.
PREVIOUS: RED BANK: EX-FIRE CHIEF MEGO DIES NEXT: RED BANK: HOMEWARES SHOP MOVES RIGHT IN