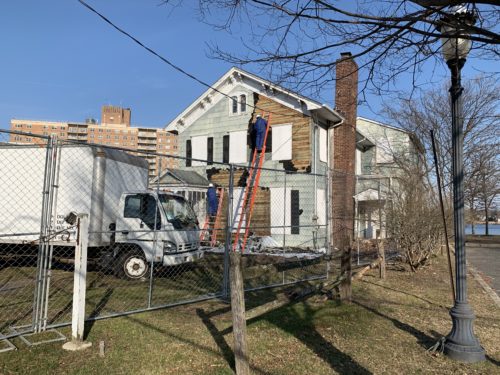 Work was underway on at least one of two long-vacant buildings abutting the Red Bank Public Library Monday. (Photo by Trish Russoniello. Click to enlarge.)

A rendering of the Rivermark project approved by the planning board. (Drawing by Michael James Monroe Architects. Click to enlarge.)

The site, on  the northeast corner of West Front Street and Maple Avenue, won planning board approval in July, 2018 for a commercial and residential building dubbed Rivermark by its owner  at the time, Mark Forman.

But work on the plan never got going.

Three months ago, an entity called 96-98 West Front Street LLC bought the properties for $1.8 million, according to a deed filed with Monmouth County. New Jersey business records show the LLC was created in September at an address on Conover Lane in Middletown, listing Vladimir Shamaev as the managing member.

redbankgreen could not reach Shamaev for comment Monday. An official in the borough planning office said the new owner is believed to be moving ahead with the approval.

Borough construction official Fred Corcione said no demolition permit has yet been issued and the site is undergoing “pre-demolition” work.

Removal of asbestos shingles, which is regulated by the federal Environmental Protection Agency, is underway at 96 West Front, a former dentist’s office next door to the library, said a worker on site.

According to Corcione, LIS Consulting Services LLC, an environmental management company, is on site performing air monitoring during pre-demolition removal and abatement.

The planning board’s approval allowed for a four-story, 26,000-square-foot building with ground-floor commercial space and eight luxury apartments. The project also would provide 43 parking spaces in an underground garage.

At the 2018  hearings on the plan, architect, Michael James Monroe detailed a plan for a public-access terrace on the north side of the building, offering sweeping views of the Navesink River. The terrace would sit above the entrance to the underground parking.